The ScotRail Alliance has created a map to show customers how they will access and exit Glasgow Queen Street Low Level station while work is under way in the Queen Street High Level Tunnel. The tunnel will close on Sunday 20th March for 20 weeks. 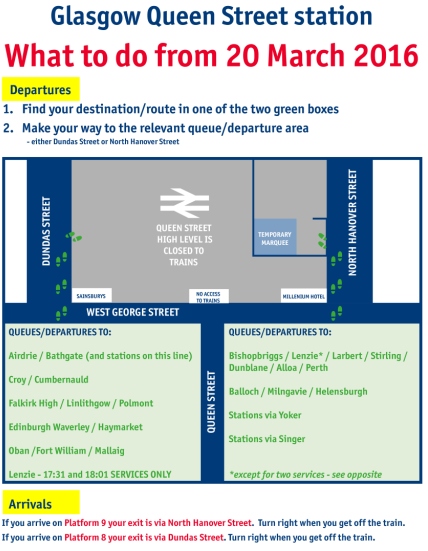 To ensure people can enter and leave the station safely, a ‘one way’ traffic system will be in place on each Low Level platform, similar to the plan that was in place during the Glasgow 2014 Commonwealth Games. Customers will be directed to queuing areas, and then guided down to the platform when their train arrives.

The map (attached) is currently displayed in Queen Street station and, from this week, staff will be in key stations issuing customers with smaller versions to keep. Passengers are also being advised to arrive at Queen Street station ten minutes earlier than they normally would, particularly during the first week of the tunnel works, in order to make sure they can board the service they are aiming to catch.

Customers for the below stations will enter via Dundas Street, and exit on North Hanover Street:

Customers heading to the following stations will enter via North Hanover Street, and exit on Dundas Street:

The entrance to the station from George Square (on West George Street) will still be open, but customers will not be able to use this entrance to access the Low Level station.

Rob Shorthouse, Comunications Drector for the ScotRail Alliance, said: “The work that’s taking place in Queen Street Tunnel paves the way for us running faster, longer, greener trains in the future. However, while the work is ongoing, there will be changes to train times and to the way people can access the station. This map is about making sure people understand where they need to go in order to get their train. We’ve learned a lot from the Commonwealth Games and from last year’s work in Winchburgh Tunnel. The big lesson is to make sure people have enough information to make choices about their own journey. I hope this map makes those choices that little bit easier.”