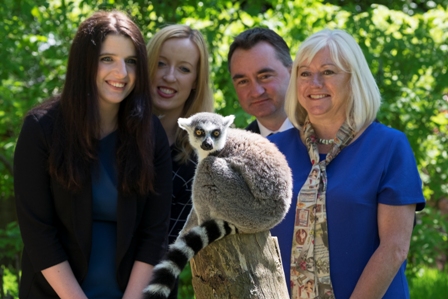 The exclusive agreement to be ‘Legacy Partners’ with Gillespie Macandrew is a first for RZSS, the Scottish based charity which operates RZSS Edinburgh Zoo and RZSS Highland Wildlife Park. The partnership will help the charity to raise vital funds for priority wildlife conservation projects, spanning 20 countries across the globe.The partnership will initially cover a two year period and will see Gillespie Macandrew work with RZSS to deliver a focused legacy campaign to encourage philanthropic giving across Scotland.

The two organisations will carry out a series of activities and events which will seek to promote legacy giving, focusing on communicating to audiences the significant impact gifts in Wills can have on the third sector, as well as highlighting the benefits of charitable giving for people when making their Will.

Legacy gifts will be directed by the charity to priority work programmes, from securing futures for some of the planet’s most threatened species to supporting RZSS’ award winning education programmes. The two organisations hope that by combining forces, more people will come to understand the difference a simple gift in a Will can make for both people and animals across the globe.

“Recent statistics show that Scots are a very generous nation and not only are there are tax advantages to gifting but what better legacy than to leave a gift that can make a real difference when you’re gone. We will be working in close association with RZSS to help raise awareness of just how important legacy funding is to charities and the difference it can make to them.”

Legacy fundraising is now the single biggest source of voluntary income to charities and non-profit organisations in the UK and is worth £2 billion each year. Annual legacy giving figures reveal that almost 35,000 people across England, Wales and Scotland left 112,937 gifts to charity in their Wills in 2014, with supporters typically choosing to benefit three charities.

“Since its establishment in 1909, RZSS has been working for over 100 years to promote the awareness and conservation of rare and endangered animals. As an independent Scottish charity, we receive no government funding. Vital donations – such as those we receive through Wills – will help us continue to protect species around the world, from the critically endangered Scottish wildcat to the vulnerable chimpanzees of Uganda.

“We hope that by launching this strategic campaign with Gillespie Macandrew, we can open up the potential of legacy giving to a wider audience and connect even more generations with our wonderful animals”.