G.H.Q. Spirits is honoured to sign The Armed Forces Covenant

G.H.Q. Spirits is honoured to sign The Armed Forces Covenant – a commitment to support the country’s servicemen and women wherever and however an organisation can – was signed at our Seathwood Headquarters in Dundee on 26 January. Deputy Commander of 51 Brigade and Army Headquarters Scotland, Colonel Anthony Phillips, co-signed the Covenant on behalf of the Ministry of Defence, with G.H.Q. Spirits owner James McNeill signing for his company.

G.H.Q. Spirits is an award-winning distillery in the Cairngorms, founded in 2020. They hand craft premium gin and vodka distilled in the Scottish Highlands, using some of the purest naturally filtered water in the world. G.H.Q. Gin and G.H.Q. Vodka are a heart-felt salute to everything that they hold dear: romance, honour, loyalty, discretion and courage. 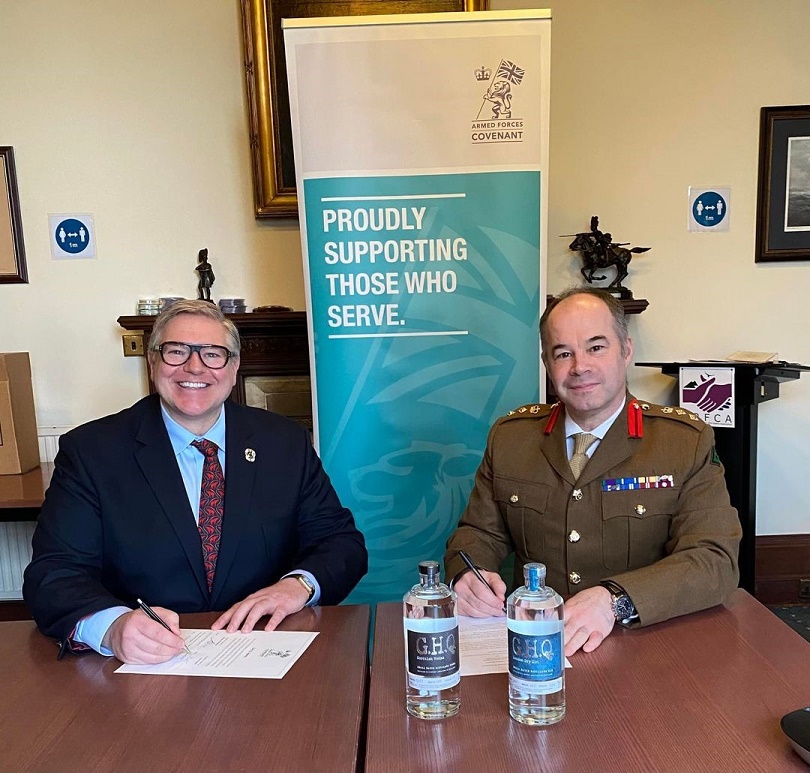 James worked in the events industry in London for 14 years before embarking on distilling. The COVID-19 pandemic carved out time for him to be able to create G.H.Q. Spirits. He felt inspired by his family military history, stories and adventures. For example, his grandmother, Lena Lowe, was a dispatch rider for the military and raced across Scotland delivering secret documents to help in the war effort. His great grandfather, William Henry Lowe, served as an engineer on HMS Hood during World War II, sadly going down with the ship when she was bombed in 1941.

These stories inspired three of their sons to enter the military too; Royal Air Force, The British Army and the Parachute Regiment. So it felt right to James that G.H.Q. Spirits becomes an Armed Forces-friendly employer. James said: “It is an honour to sign the Armed Forces Covenant and give something back to our military personnel. We are delighted to be working with HRFCA and look forward to developing our relationship with the Armed Forces.”