Floral Clock resplendent for Save the Children centenary 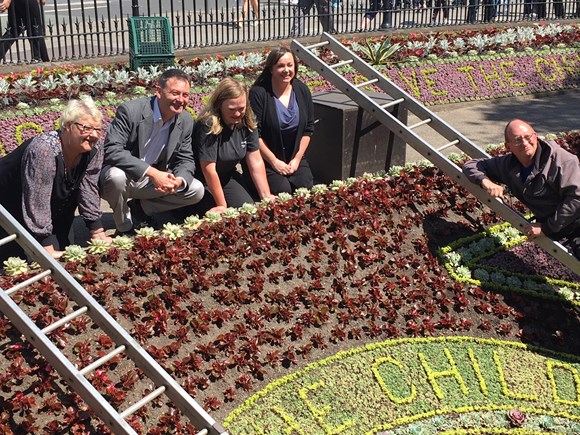 Work has finished to complete this year’s design on the world’s oldest Floral Clock – in Edinburgh’s West Princes Street Gardens.

For 2019, the hugely popular landmark commemorates the centenary of charity Save the Children.

City Parks Leader Councillor Karen Doran was joined by Claire Telfer, Head of Save the Children in Scotland, and Council parks staff responsible for creating the clock. Together they officially unveiled this year’s intricate design.

One hundred years ago, Save the Children’s founder Eglantyne Jebb, along with her sister Dorothy, held a public meeting in London’s Albert Hall to launch the charity. Their mission was very simple – to fight for children left sick and starving in Europe after the First World War. Since that day, Save the Children has always been there for children when they’ve needed the charity the most.

City of Edinburgh Council Parks Leader Councillor Karen Doran said: “We couldn’t be prouder of our amazing Floral Clock, which is looking absolutely stunning with its 2019 design to mark the Save the Children centenary. People flock from far and wide to see the clock every summer and it’s undoubtedly one of Edinburgh’s most cherished attractions.

“Huge thanks to the fantastic gardens staff who have spent hundreds of hours perfecting the design. They’ve excelled themselves yet again!”

“Our founder was the first person to speak about children’s rights globally and her declaration formed the basis of the UN Convention on the Rights of the Child, the most universally accepted human rights instrument in history. It is fitting that in our centenary year, the Scottish Government has committed to realising the rights of all children in Scotland in Scots law for the first time.

“We are proud of the work we’ve done to support children in Scotland over the last 100 years with the help of supporters, volunteers and staff in Edinburgh and across Scotland. We are so privileged to have our legacy commemorated in the very heart of Edinburgh and want to extend a massive thank you to all those involved in bringing this vision to life. We hope all those involved in supporting us over the years will be able to visit and enjoy the clock.”

The Floral Clock was first created in 1903 by then Edinburgh Parks Superintendent, John McHattie, and is the oldest of its kind in the world. It initially operated with just an hour hand, with a minute hand added in 1904, followed by a cuckoo clock in 1952. Until 1972 the clock was operated mechanically and had to be wound daily.

Since 1946 it has been designed in honour of various organisations and individuals, including the Girl Guides Association, Robert Louis Stevenson and the Queen, for her Golden Jubilee. In the clock’s centenary year in 2003 it won a Gold medal at the RHS Chelsea Flower Show.

It has taken three gardeners six weeks to plant the 35,000-plus flowers and plants used to create the clock, which will be in bloom until October. Plants included in this year’s design are: Crassula cooperi, Antennaria, Kleinia, Echavarias, Sedum spathufolium, Pyrethrum, Non stop Begonias, Begonia semperflorens, Thymus and Agaves.

Find out more about Edinburgh’s parks and green spaces online.