As the traditional 9-5 working day becomes less and less common, the times at which people want to go to the pub, grab a meal or work out at the gym are changing. A new report from Barclays shows that although over a quarter of UK hospitality and leisure businesses recognise this growing demand, opening hours are not keeping up with changes to modern working lives.

Since our leisure time has shifted, a quarter of workers across the UK would now like to go to a museum in the evening (between 6pm-11pm), over one in ten (13%) film fans would choose to go to the cinema in the small hours (11pm-5am), and almost one in five (19%) late-night diners would choose to get a takeaway after closing time (11pm-5am). By responding to these changing demands, the British hospitality sector could benefit from a further £6.75bn1 a year, which equates to £437m for Scotland, in increased revenue according to research from Barclays.

The new Barclays Corporate Banking Hospitality and Leisure report, Open All Hours? finds that only a quarter (28%) of Scots now work traditional 9-5 hours, with nearly a fifth (17%) saying they need different opening hours. The report also finds that more than one in ten Scots (13%) expect 24-hour hospitality services. By responding to this demand, Scotland’s restaurants (£126m per annum), takeaways (£144m), and pubs, bars and clubs (£99m) could benefit the most. 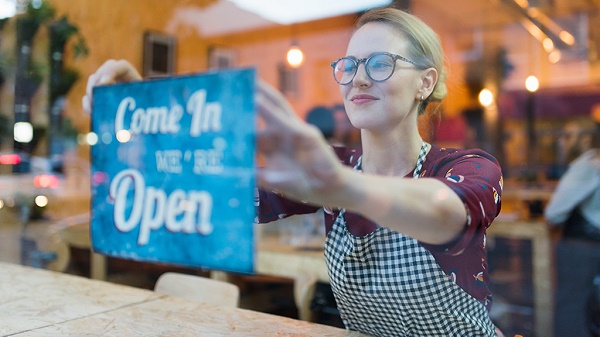 The takeaway service industry is missing out on a £2.2 billion order

Whilst consumer demand isn’t always being met, satisfaction with the availability of hospitality services varies across the sector.  As Britain becomes more health conscious, gyms and sports clubs have been quick to adapt, with almost one in five (18%) hospitality and leisure business leaders surveyed already changing their opening hours. Pure Gym is one example of an agile business which has recognised shifting demands and adapted its business model to accommodate this changing dynamic. Pure Gym uses PIN-controlled access systems, smart lighting, temperature controls and extensive video monitoring to overcome the staffing issues that deter some businesses from after-hours opening. This has enabled 20% of Pure Gym’s customers to work out during the night.

Takeaway services, on the other hand, have left more than a quarter of Scots (27%) hungry for more, having been unable to order a takeaway as the business was closed. While digital food delivery services such as Deliveroo, JustEat and Uber Eats, have provided customers and restaurants with an easy to use platform for home delivery, over a quarter (27%) of customers in Scotland have been unable to get a takeaway. This desire to order a takeaway at unusual hours is even higher among young workers (18-24 year olds), with (37%) keen for delivery between 11pm and 5am. This opens up the opportunity for takeaway services across the country to extend their hours, with customers willing to boost the sector by up to £2.2bn.

Commenting on the report, Jamie Grant, Head of Corporate Banking for Barclays in Scotland, said: “Adapting to the changing consumer demand presents a substantial opportunity for Scottish businesses. Our research has shown that leisure operators across the country could access a staggering £6.75bn per annum by accommodating their customers’ evolving needs which have been brought on by changing working patterns. While that may be a challenge for some providers, understanding the value of the opportunity makes the prize more tangible.

“The current leisure environment does present a number of challenges for the sector’s businesses; the labour supply is challenged by Brexit, rent increases and food inflation are all set within the context of an incredibly competitive market which is already heavily discounting.  However, those that don’t adapt to this type of newly developing consumer demand risk being left behind and in this ever-competitive environment, businesses need to weigh up the value of the long-term opportunity over the cost of the short-term investment.”

Although the research reveals that seven in ten (69%) UK businesses surveyed have received requests in the last 12 months to extend their standard opening hours, only one in ten (12%) has adapted to meet changing customer demand.

But it’s not as simple as just re-setting the alarm clock. British businesses cite increased overheads (19%) as the most common barrier to opening at different times, with large operators particularly seeing this as a threat (23%). Against a backdrop of looming challenges and fierce competition, businesses that are facing these challenges on a national scale, face an even bigger threat.

With all this pressure, changing demand for opening hours may seem like a lower priority for businesses. But in such a competitive market, evolution is crucial in order to stay profitable. There are also a number of solutions that can help businesses extend their opening hours without an overwhelming increase in overheads.

There are several options for British hospitality and leisure businesses looking to overcome these challenges. Technology can reduce the need for a 24/7 workforce and make hospitality services more accessible.  Recognising this, just under a third (27%) of businesses have invested in new tech in the past year in an effort to appeal to customers in the future.

Among gyms, sports clubs and hotels for example, 15% of Scottish workers would be more likely to use a service if it has an automated check-in/check-out procedure. This suggests that people are more inclined to use services if they know they will be available 24/7.

For services where pre-booking is necessary, online booking is also an incentive as it allows customers to book 24/7. More than a fifth (21%) of Scots say that having the option of an easy to use booking platform would mean they would use hospitality services more often. Receiving notification on their mobile showing services based on their location also makes 16%  of Scottish customers more likely to choose a service.

Changing working preferences are adapting how and when we use hospitality services. Customers are looking for both different opening hours as well as continuous access to booking platforms. Although there are barriers to overcome, Barclays research shows there is a £6.75bn opportunity for hospitality businesses that can make the change.