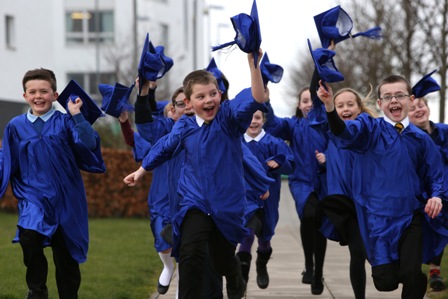 The junior scholars, who were dressed head to toe in striking blue gowns and mortar boards, were joined by family, friends and teachers who gathered to celebrate their learning achievements.

QMU is the first higher education institution in the east of Scotland to host the Children’s University which aims to help school children, aged between seven and 14 years of age (and five and six year olds with their families), become confident learners and broaden their horizons.

The initiative strives to raise children’s aspirations, encourages them to learn in different ways, and rewards them for taking part in a wide variety of learning activities outside of school hours. The children build up credits the more they engage in learning activities.  They are also motivated to keep going with their learning activities by working towards bronze, silver and gold certificates.

The Children’s University ethos is clearly aligned with the aims of the Scottish Curriculum for Excellence in terms of helping children become successful and confident learners, responsible citizens and effective contributors.

Queen Margaret Children’s University has really captured the attention of thousands of youngsters and their families across the east of Scotland. The first graduation ceremony took place in January 2014 and today over 2750 pupils have signed up to the scheme. Over 1000 of these pupils have already achieved a minimum 30 hours of learning activities outside of school hours. The Children’s University continues to expand with more schools and pupils signing up each month.

Emily Clyne, aged 13, attends Knox Academy in Haddington, and has been part of the Children’s University for a year. She said: “I love being involved in the Queen Margaret Children’s University.  It’s great that my extra-curricular activities get credits and count towards my learning.  I’ve encouraged all my friends to take part too because it’s such fun and there are so many different activities to choose from. So far I’ve taken part in Japanese classes at school,  and I currently sing in ‘Glee Club’ and take part in the ‘Young Writers’ group. I also starred in the video that was made by the University to promote the Children’s University.”

Mary De la Peña, Chief Executive of Children’s University Scotland, said: “Children can only aspire to what they know exists. By encouraging them to learn in different ways, to aspire to achieve more through learning, to be inquisitive and to try new things, we will encourage them to consider future possibilities, not matter what their background.”

Ann Loughrey, Trustee and Executive Officer at the ScottishPower Foundation, said: “The ScottishPower Foundation is committed to supporting young people in the advancement of their education and careers and we are delighted that the Queen Margaret Children’s University has once again proven to be such a success. It is clear that the young people gain a great deal from their educational journey and we are very pleased to play a part in that.”