An Edinburgh Napier student shared the stage with Scotland’s First Minister Nicola Sturgeon last weekend after being chosen to speak at the 2018 Youth Climate Summit.

Third-year International Tourism and Marketing student Benjamin Lang put himself forward for the opportunity after the 2050 Climate Group reached out to see if any of its young leaders were interested in participating the event, which showcases how young people in Scotland are taking action on climate change and driving Scotland through positive change.

He was selected to be one of the key guest speakers, joining First Minister Nicola Sturgeon to address the summit at Glasgow’s Royal Concert Hall on Saturday (April 28). 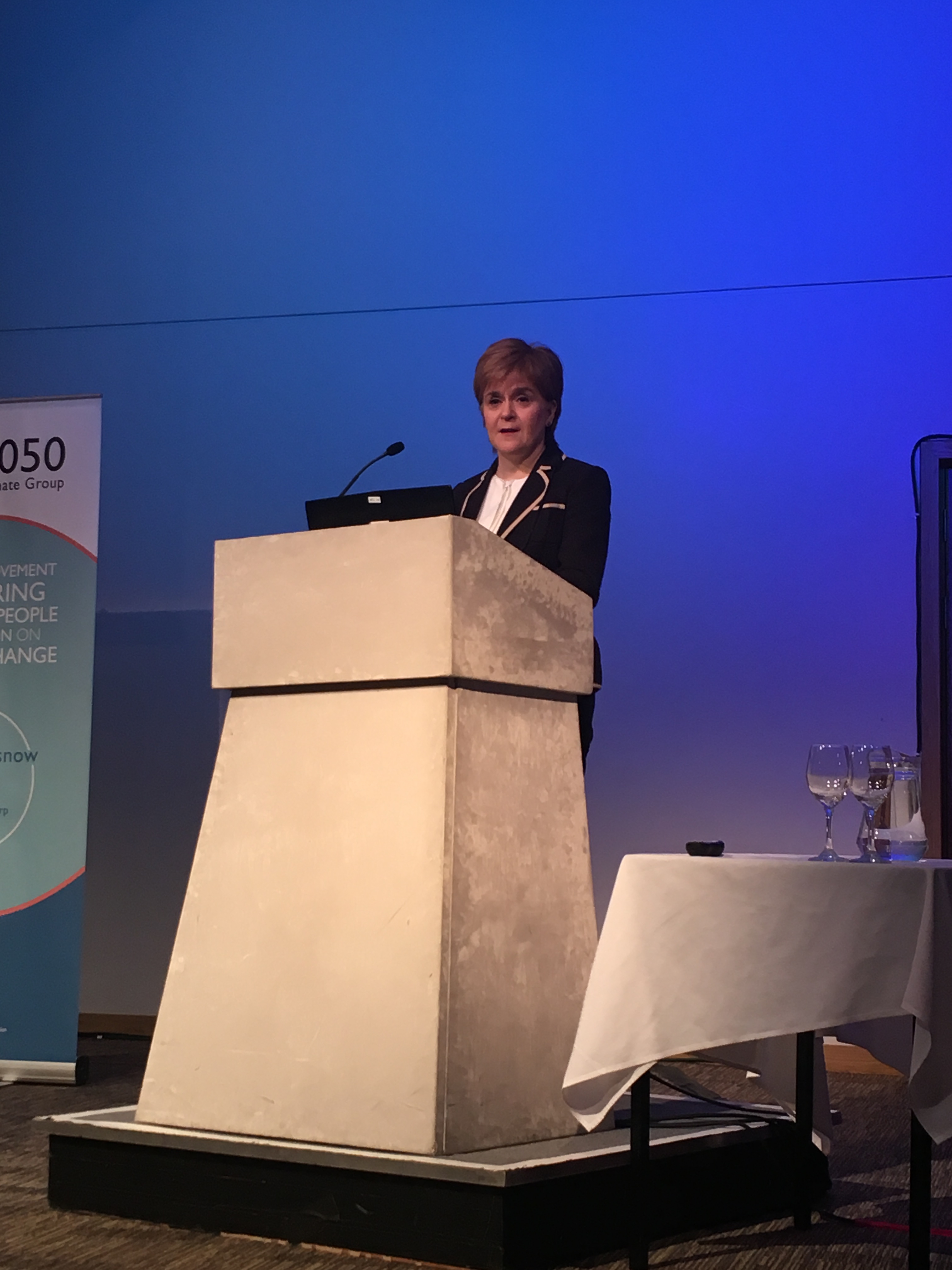 “It was inspiring seeing so many young people come together on a Saturday to discuss the topic of climate change,” said Benjamin. “I feel humbled that I had the opportunity to speak in front of such a large audience and believe that the 2050 Climate Group has started a nationwide movement.”

Benjamin first got involved by joining the group’s Young Leaders Development Program (YLDP), which aims to empower and educate young people between the ages of 18-35 to become this generations leaders of sustainable thinking. 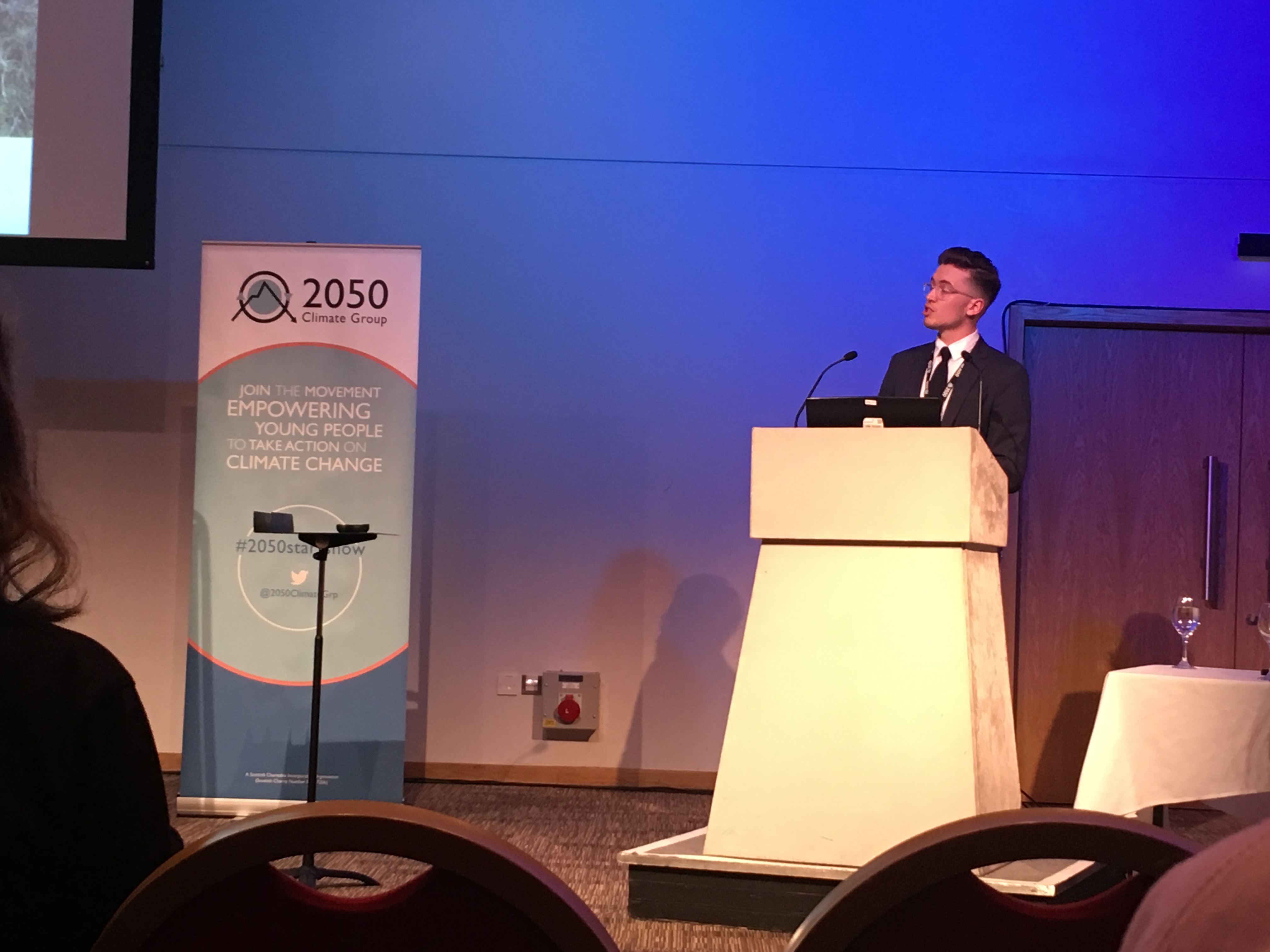 “A young leader is someone who takes away the knowledge of what they have learned throughout the YLDP and puts it into good practice,” Benjamin explained. “The YLDP has triggered collaboration between participants of the program outwith the YLDP which has led them to take action.”

Benjamin is now Regional Hub Lead for the 2050 Operational Team and is currently on placement as a marketing assistant for St John’s Shopping Centre in Perth. After moving to Scotland from Berlin in 2008, he began to get involved in his local area to push for improvements to the environment.

“Perth has the potential to be a beautiful city, but the lack of education provided on topics such as plastic pollution, climate change and carbon footprint started to frustrate me,” he said. “It became apparent that the area I lived in started to look unappealing and it made me unhappy.

“My dog eventually got injured by this, which was the last straw for me. I became very vocal and started to challenge the status quo and now Perth Council are happy to work on future projects with me.

“I am in touch with multiple organisations within Perth including the council, SEPA, Letham Climate Challenge and ADHD+. I am looking to make the topic of climate change fun, almost how the YLDP did it for me. I am just an individual who was given the platform on this prestigious summit, now I am looking to provide this platform for each individual in Perth with the goal of creating a more cohesive and engaging community.”

Now, Benjamin is urging others to follow in his footsteps and join the YLDP to make positive changes in their communities.

“The young leader’s development applications are open until May 7 and I urge anyone to take advantage of this free and amazing opportunity,” he said. “It had a massive positive impact on my life and I am sure it will do so to others.”

To find out more about the programme, click here.