An impressive Prince Albert Memorial Keep at Edinburgh Castle and a cylindrical-shaped Sean Connery Filmhouse are amongst a collection of unrealised architectural drawings to have gone on display together for the first time in a new exhibition. 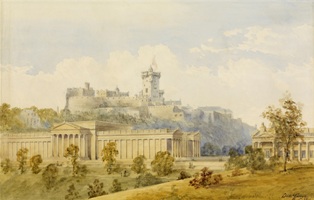 Unbuilt Edinburgh is a Festival of Architecture event with the Edinburgh Architectural Association working in collaboration with Historic Environment Scotland (HES) and hosted by Architecture and Design Scotland. The exhibition, which runs until 20th May, showcases a unique display of 19 design concepts and proposals that never went further than the drawing board.

The works, which are mostly drawn from HES’s archive collection, include ambitious, entire new design schemes and additions to some of Edinburgh’s most iconic landmarks. The exhibition features a number of unsuccessful competition entries and proposals from leading Scottish architects and practices from over the last 230 years.

Amongst the works on display is David Bryce’s 1862 proposal for the addition of a large Memorial Keep at Edinburgh Castle to commemorate Prince Albert, which if had gone ahead would have altered the capital’s skyline dramatically. Whilst an unsuccessful proposal dating back to 1919 from Frank Charles Mears for the Scottish National War Memorial would have seen the creation of a ‘Via Sacra’ or ‘Sacred Way’. Mears’ proposed design would have seen the Johnston Terrace route, located to the south side of the castle, lined with monuments and memorials.

As well as offering visitors an insight into the architectural thinking and styles of the past, the display also charts a selection of unrealised works, design processes and plans throughout the decades. This unbuilt architectural timeline includes a 1937 proposal for the Murrayfield Ice Rink and Sports Stadium to the more contemporary Princes Street Galleries, that would have seen a radical redesign for the east end of Princes Street.

HES’s Architecture and Industry Operational Manager and co-curator of the exhibition, Neil Gregory, said: “Unbuilt Edinburgh offers visitors a tantalising view of what the capital could have looked like had different decisions been taken. These drawings help us to make sense of the cityscape that we see today. They highlight key episodes in the history of some of the city’s major landmarks and the careers of some of Scotland’s leading architects.”

Roderick Binns of the Edinburgh Architectural Association and co-curator, added: “This exhibition is a wonderful showcase of Scottish architectural talent, innovation and creativity over the last 250 years. The buildings, monuments, bridges and other designs depicted in this collection of drawings provide visitors, as well as the architects of today, with a truly unique show.”

Unbuilt Edinburgh is on display at the Architecture and Design Scotland* building until Friday 20th May. This free exhibition is open Monday- Friday, 9am- 4.30pm, Thursday until 6.30pm (closed Monday 9th May).