The Capital’s  rollout of 20mph speed limits for residential and shopping streets continues, with new signs and lines starting to be installed for Phase 2 from December.

Following the introduction of slower speeds in the city centre and rural west Edinburgh (Phase 1) at the end of July 2016, the second stage of the citywide scheme consists of two zones, namely Zone 2 (North) and Zone 3 (South Central / East). 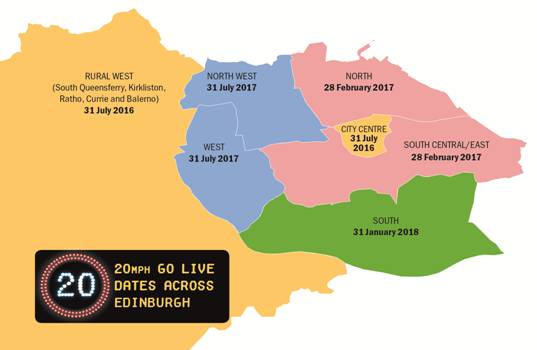 Signs and lines advertising the new 20mph limits in these zones will be installed over the next few months, ahead of the slower speed limit coming into force from 28 February 2017.  The installation of signage for construction Phase 2 starts this week in the following areas:

Large 20mph signs will mark the entrance and exit of a 20mph area where the speed limit is changing.  These will be supplemented by smaller repeater signs or road markings with speed limit roundels.

While retaining a network of arterial routes at 30mph and 40mph, the project extends 20mph speed limits  to approximately 80% of Edinburgh’s streets. Around 50% of the Capital’s roads already had a 20mph limit prior to the rollout starting in the summer.

Slower speeds bring many benefits to places and people. They help to reduce the risk and severity of collisions, encourage people to walk and cycle and spend more time in an area, boosting trade for local businesses. The reduced speed makes it easier to cross roads, particularly for children and older people.

Police Scotland are enforcing the new legal limits already in place in Zone 1. Since this zone went live on 31 July, police have carried out a minimum of 21 speed checks and issued tickets or warnings to at least three drivers during each check (at least 68 warnings and 13 tickets).