EIFF is proud to announce that a special 30th anniversary screening of the newly 4K restored Highlander, with special guests in attendance, will take place on Saturday 18th June, as part of the celebrations marking EIFF’s milestone 70th edition. 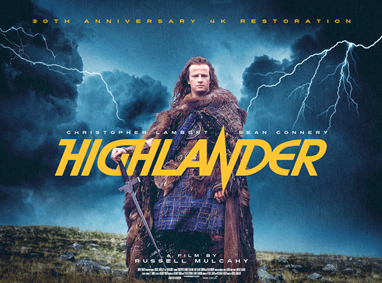 One of the great action-fantasy romps of the 1980s, this freewheeling film has developed into a cult favourite, packed with quotable lines, stylish sword-fighting moments and a memorable soundtrack from Queen.

Its interweaving storyline may well flit around from New York of the 80’s to World War II, but it has its dramatic origins in the 16th century Scottish Highlands where Connor MacLeod (Christophe Lambert) first discovers he is not like other men. After doing battle with a rival clan he is stabbed by a strange mercenary fighter called the Kurgan (Clancy Brown), but finds that he cannot die. Befriended and trained by the charismatic Juan Sanchez Villa-Lobos Ramirez (Sean Connery), he finds out he is part of a group of immortals who must do battle until there is only one left alive.

Clancy Brown is acclaimed as a cult icon thanks to his mesmeric and maniacal performance as the Kurgan whilst Christophe Lambert is soulful and heroic as Connor, and Sean Connery quite sublime as the foppish yet skilful Ramirez.

Clancy Brown commented: “It’s taken a while, but I swore to myself that I would return again to Scotland after filming Highlander 30 years ago where I first learned of Robert the Bruce, James Macpherson, The Fortingall Yew and, most blissfully, single-malt scotch whisky.”

Mark Adams, EIFF Artistic Director said: “We are truly delighted to be screening this cult classic on its 30th anniversary. It is a vibrant, fun and thrilling film and just as entertaining as it was all of those years ago. Plus it features some magnificent Scottish locations.”

Clancy Brown and other special guests will be in attendance at the screening on Saturday 18th June at Cineworld, Fountain Park. The Festival is grateful to Park Circus and StudioCanal for their generous support of the screening.

Tickets priced £8/£6 will be on sale at 12pm on Monday 9th May and can be purchased here: bit.ly/1WjSfEm