We spoke to one of our major corporate partners Aberdeen Standard Investments about some of their projects that have helped build resilience for businesses and communities during Covid-19. 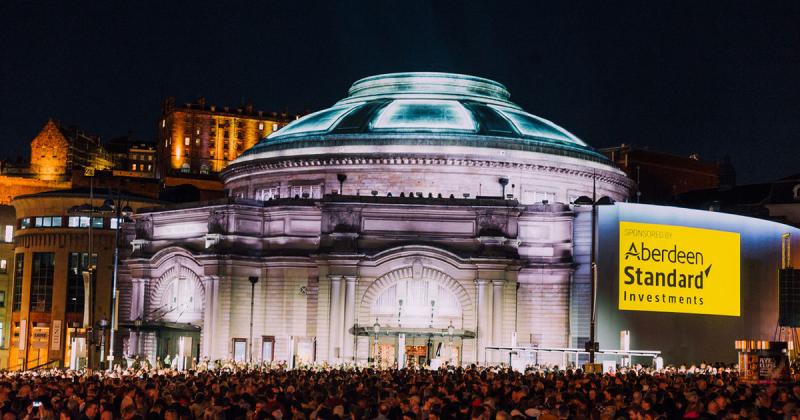 Aberdeen Standard Investments (ASI) have supported Edinburgh International Festival for many years, initially as Standard Life Investments ahead of a merger with Aberdeen Asset Management in 2017. Over the years, their support has made world-class programming possible, including the free annual Aberdeen Standard Investments Opening Event since 2015. With a sponsorship portfolio that focuses on sporting events and the arts, the onset of the Covid-19 pandemic challenged their team to come up with creative and meaningful ways to support their staff and partners.

Ordinary priorities around promoting the brand to likeminded audiences had to evolve throughout these uncertain times. “Because of the pandemic, we’ve had to look at our objectives and say, what can we do with our sponsorships?” Jill Maxwell, Head of Brand Activation, explained. For ASI, resilience became about accepting a new reality and putting work in place that benefited everyone involved. In fact, the ASI Sponsorship team felt they had been given some much needed time to reflect on how best to ensure sponsorships reached wider teams and local communities.

Like many others, an emphasis on digital came first. With ASI utilising their partnerships with athletes such as Paul Lawrie, Catriona Matthew, Gordon Reid and Kayleigh Haggo to provide at-home content such as workouts, cooking and challenges as part of an ‘ASI Isolation Series’. Then came a weekly webinar series, featuring familiar Festival faces such as Nicola Benedetti and Anna Meredith, who joined host Emma Dodds to discuss life since the lockdown.

Despite being a global investment company, Aberdeen Standard Investments is firmly committed to their roots in Scotland, and supporting Edinburgh where they are headquartered. In a particularly serendipitous moment, the team quoted back the Patrick Geddes quote that drives our own Learning and Engagement work: “Think global, act local.”

“The diversity of the acts and artists that Edinburgh International Festival works with is something that really aligns with our values and our culture as well, and that comes from being global.” This shared core value has inspired the development of ASI’s sponsorships during Covid. Their support of the ASI Ladies Scottish Open marked the first women’s professional sporting event to return to Scotland since lockdown began. The golf tournament was only able to go ahead in line with strict safety protocols, but brought excitement to a broad international audience. The event also provided an opportunity to promote sustainable investing as ASI were able to offset all the carbon travel emissions made by the players and their caddies into an accredited project in the Gola Rainforest. They also gave the first Nigerian professional on the Ladies European Tour the opportunity to play at the event, using the platform to help drive forward the accessibility of golf.

One of the team’s main objectives is diversity and inclusion in their portfolio of sponsorships. ASI supported the disability sports series, Superhero Series, through their ‘At Home Superheroes’ event, with staff raising money for two disability charities. They raised various sums of money for different community charities including £27,000 for East Lothian Foodbank as part of the Ladies Scottish Open.

At the core of ASI’s sponsorship work this year has been meaningful connection with their staff at a time when it was most needed. “The sponsorships are touchpoints that can connect people – they’re sport, they’re art – they can be quite emotional connections for people” explained Jill Maxwell, citing the loss of personal connection as one of the biggest challenges faced by the organisation. Initiatives like an ASI sponsorship newsletter helped keep a workforce of over 7,000, many of whom were isolated at home, engaged in sponsorships. Their aim was to bring a bit of light relief to staff members’ days and as a result actually increased staff engagement. “It’s almost been a bit of a reset button,” joked Jill as the team suddenly found themselves all in the same situation “it took a global pandemic to bring us all together!” Staff engaged with webinars, including a conversation between Scottish Ballet and Ballet Black, which were triggered by the pandemic and made the team excited to represent ASI.

Despite the cancellation of the 2020 Edinburgh International Festival as originally conceived, ASI continued to support the Festival to build resilience and redesign August activity. When asked what influenced the decision to continue the generous sponsorship under these circumstances, the answer was simple: “we are a company that is in it for the long term, long term investing is an important part of our investment approach. Relationships are also incredibly important, whether they be with customers and clients or sponsorship partners, we just wanted to try and do our bit,” said Jill.