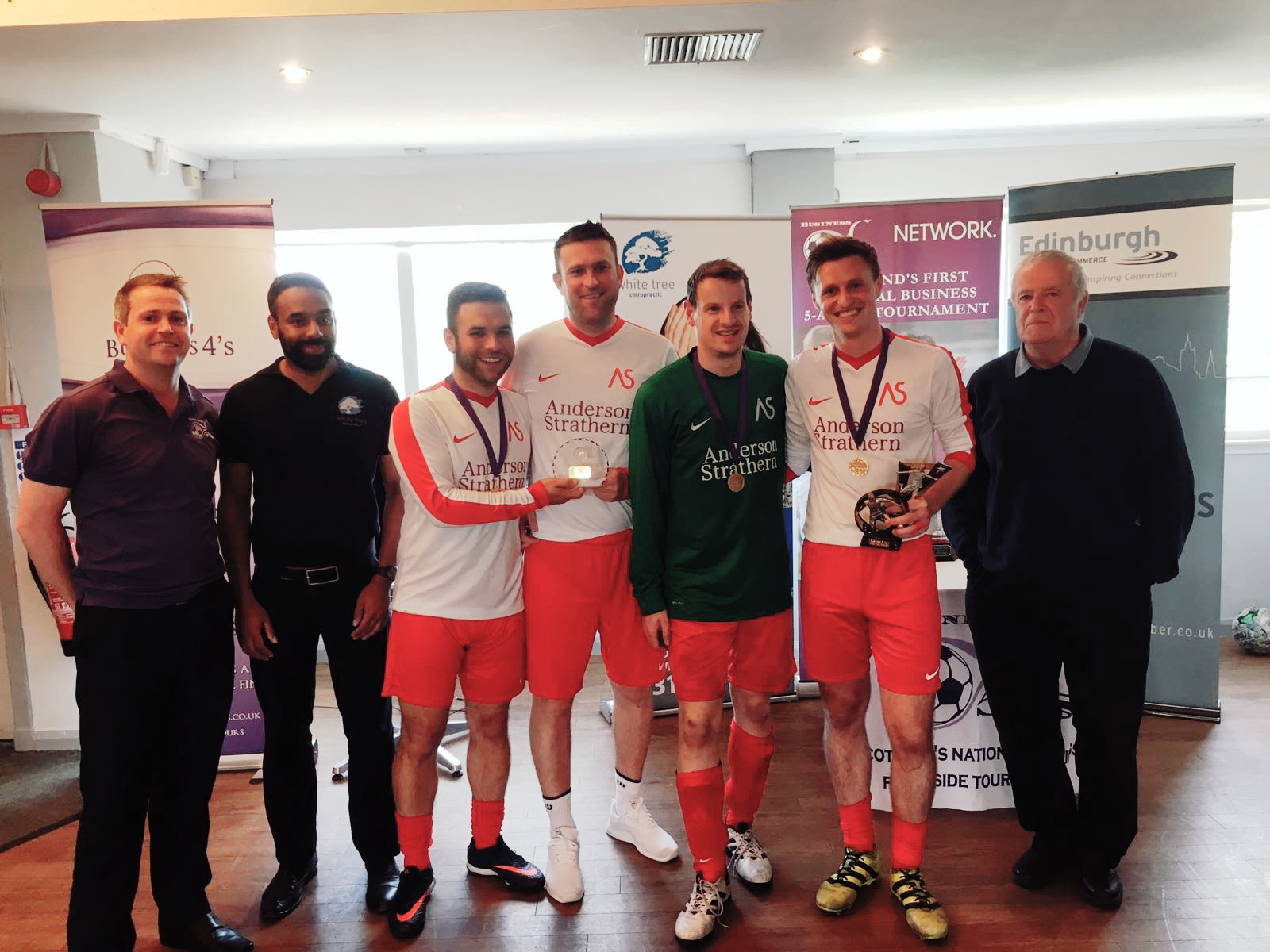 Business Fives summer season kicked off in Edinburgh where the Professional Services sector bid for the chance to qualify for our national final this September.

Supported by the Edinburgh Chamber of Commerce and sponsors White Tree Chiropractic, the event was a goal fest with 209 goals scored across the 31 matches as teams. The companies that took part were all playing with one goal in mind, to win for their chosen charity with organisations such as Princes Trust, Macmillan, Cash for Kids to name just a few of the charities hoping to benefit.

A commendable fundraising effort from eventual champions league finalists, BT who raised £224 for their chosen charity, Macmillan. Pinsent Masons raised £125 for Starfish on their way to the Europa League final.

The event finished with a Q & A session with Business Fives ambassador Pat Stanton. A legend amongst Hibs fan having made almost 400 appearances for them in a glittering career that saw him play against greats of the game like Eusebio, Johan Cruyff and George Best who he singled out as the best of his generation, he shared stories of memorable moments throughout his career.

Tournament sponsor, Dr Gary Blackwood said “We here at WTC are delighted to have the opportunity to work alongside Business Fives, as we see sport and exercise as an integral part of healthy working offices. We all know that exercise is one of the best ways to prevent ill-health, lowering blood pressure, raising energy levels and improving productivity and focus.”

The tournament initially saw 3 groups playing to qualify for the Champions League, Europa League and Intertoto Cup group stages. BT looked in superb form as they topped their group scoring 9 goals in 3 matches, it was however second place in the same group, Anderson Strathern who set the early scoring standards with 17 group stage goals, notching up big wins against KPMG and Spence & Spence. In group B a thrilling encounter between Gilson Gray and Addleshaw Goddard who played out a 3 all draw was the pick of the ties.

The Europa League saw no less than 3 law firms play for bragging rights but it was defending champions Anderson Strathern who rose to the top of the group scoring freely in the process. Addleshaw Goddard and Pinsent Masons did enough to book their place in the Europa League semi final.

They were joined by Intertoto group winners, Edinburgh Airport who were beginning to find form after some earlier defeats, along with KPMG who beat Gilson Gray 2-1 in a very close encounter.

In the Champions League semi-finals, 2 goals from City Cabs wasn’t enough to see them overcome Anderson Strathern who were beginning to find the net with increasing regularity. BT put 3 passed Bruce Stevenson to end the insurance brokers journey in the competition. The final was a similarly one-sided affair with tournament top scorer Gary Burton, singled out by Pat Stanton as the man of the match in the final helping Anderson Strathern to lift back to back Professional Services titles in Edinburgh.

Over in the Europa League, Pinsent Masons, who were second in the overall goal scoring charts for the day, overcame KPMG in a 7-4 thriller to book their place in the final against Edinburgh Airport after their victory against Addleshaw Goddard. The Europa league final proved a game to far for Pinsent Masons as Edinburgh Airport ran out 8-3 winners to book their place in their second national final in a row.

The action continues this month with 6 more industry sector qualifiers across Glasgow and Edinburgh as the tournament aims to reach £10,000 for charitable causes throughout Scotland. Follow all the action online on the Business Fives social media channels and website.