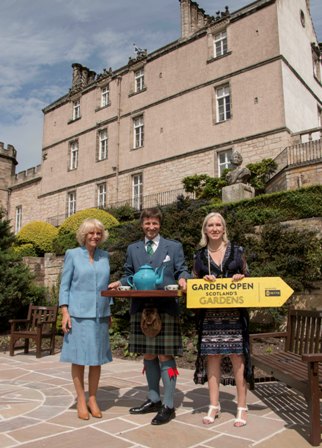 Her Royal Highness met volunteers and staff who help the organisation ‘open the gates’ of hundreds of gardens across Scotland every year to raise funds for other deserving charities. Scotland’s Gardens was created in 1931 and Winton House holds a special place in the charity’s history as it has opened every year bar one since the charity began, making it the longest standing garden to open for the charity. At its first opening the owners raised £20 8s & 6d.

Owners whose gardens have opened for over 50 years for the charity were amongst those to chat to the Duchess and Her Royal Highness helped plant a commemorative mulberry tree in Winton’s terraced gardens – historic plasterwork in the House depicts such a tree. The Duchess also heard about the launch of a new research project into Scotland’s Gardens extensive archives with the aim of making them available to the public, historians and horticulturists.

David Mitchell, deputy chairman of Scotland’s Gardens, said: “We are thrilled that our President, the Countess of Rothesay, joined us to celebrate this special event and met many of our stalwart volunteers and garden owners. Since Scotland’s Gardens began 85 years ago it has raised almost £8.7 million for over 200 charities and given countless hours of horticultural pleasure to garden visitors, which we’re really proud of.

“Behind the scenes of course, the staff and volunteers have put in even more hours, mowing, weeding, baking cakes, distributing leaflets and greeting members of the public. The family and team at Winton House typify that commitment and it is fitting that we’ve been able to mark this milestone with them.”

In this anniversary year, 440 gardens are opening their gates as part of the Scotland’s Gardens scheme, stretching from Wigtownshire in the south west to Shetland in the north east. Most are private and not otherwise available to visit. Visitors will be able to wander around coastal gardens, village trails, grand estates and hidden urban retreats, gaze in awe at 35 National Plant Collections and have their wallets tempted at a dozen plant sales and over 200 plant stalls.

Highlights still to come during the year include openings at Boarhills Village Gardens in Fife; over 80 gardens in the autumn including Little Broich in Stirlingshire, Attadale in Ross and Cromarty, with the Hill of Tarvit Plant Sale and Autumn Fair in Fife, and Craigentinny and Telferton Allotments in Edinburgh.

Fifteenth century Winton House, home of the Ogilvy family, is a dramatic, Scottish Renaissance castle in an inspiring setting just outside Edinburgh in East Lothian.