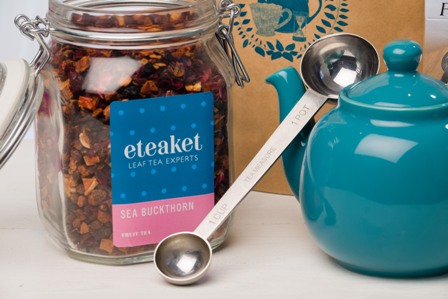 Food and drink scientists from Queen Margaret University (QMU), Edinburgh have teamed up with eteaket, one the UK’s leading artisan tea companies, to produce the only fruity tea blend of its kind, which packs a healthy punch.

Sea buckthorn, which grows wild along Scotland’s coastline, contains an array of unique vitamins, minerals and bio-active substances that are not found in standard tea.

Despite having been widely used as a healthy ingredient in juices and jams already, this is the first time that sea buckthorn berries have been used to make tea.

Experts from the Scottish Centre for Food Development and Innovation at QMU have helped eteaket to produce this punchy new flavour by blending dried cranberries and sea buckthorn berries with the mellow hibiscus flower.

With a strong research background in supporting the development of Scotland’s food and drink businesses, eteaket identified QMU as the academic partner with widest skills and knowledge for developing their new product.

Miriam Smith, Business Development Manager at QMU, said: “We’re very proud to have supported eteaket in getting this unique sea buckthorn variety of tea to market.

“By working with businesses like eteaket, QMU’s Scottish Centre for Food Development and Innovation is enhancing Scotland’s position as a leader in food and drink innovation in Europe and supporting access to the global market for healthy and functional food.

“Through practical innovation support and creative business solutions, QMU is helping Scotland’s leading food and drink businesses with new and innovative product development and analysis; as well as the development of leading edge functional, health enhancing products and ingredients and formulation of existing products.”

QMU’s food and drink experts have also helped eteaket expand its range of speciality teas for the UK and overseas market by providing customers with more detailed nutritional information about caffeine and antioxidant levels.  Researchers at QMU have extensive experience of identifying the antioxidant content of a wide variety of food and drink products, including undertaking a number of studies which have assessed the nutritional and health benefits of antioxidant rich drinks.

eteaket is a member of the QMU Sea Buckthorn Common Interest group.  The Group of nine companies was set up in 2014 to enable its members to become more informed about the nutritional properties of Scottish sea buckthorn. This unique partnership is now enabling producers to develop new products containing the sea buckthorn, maximise market opportunities, become more competitive and generate more sales, whilst raising the profile and understanding of the health benefits of the berry.