An important and highly decorative cast iron ceiling, from the period in which Scotland were the world’s leading architectural iron founders, has been gifted to Historic Environment Scotland through the Cultural Gifts Scheme. 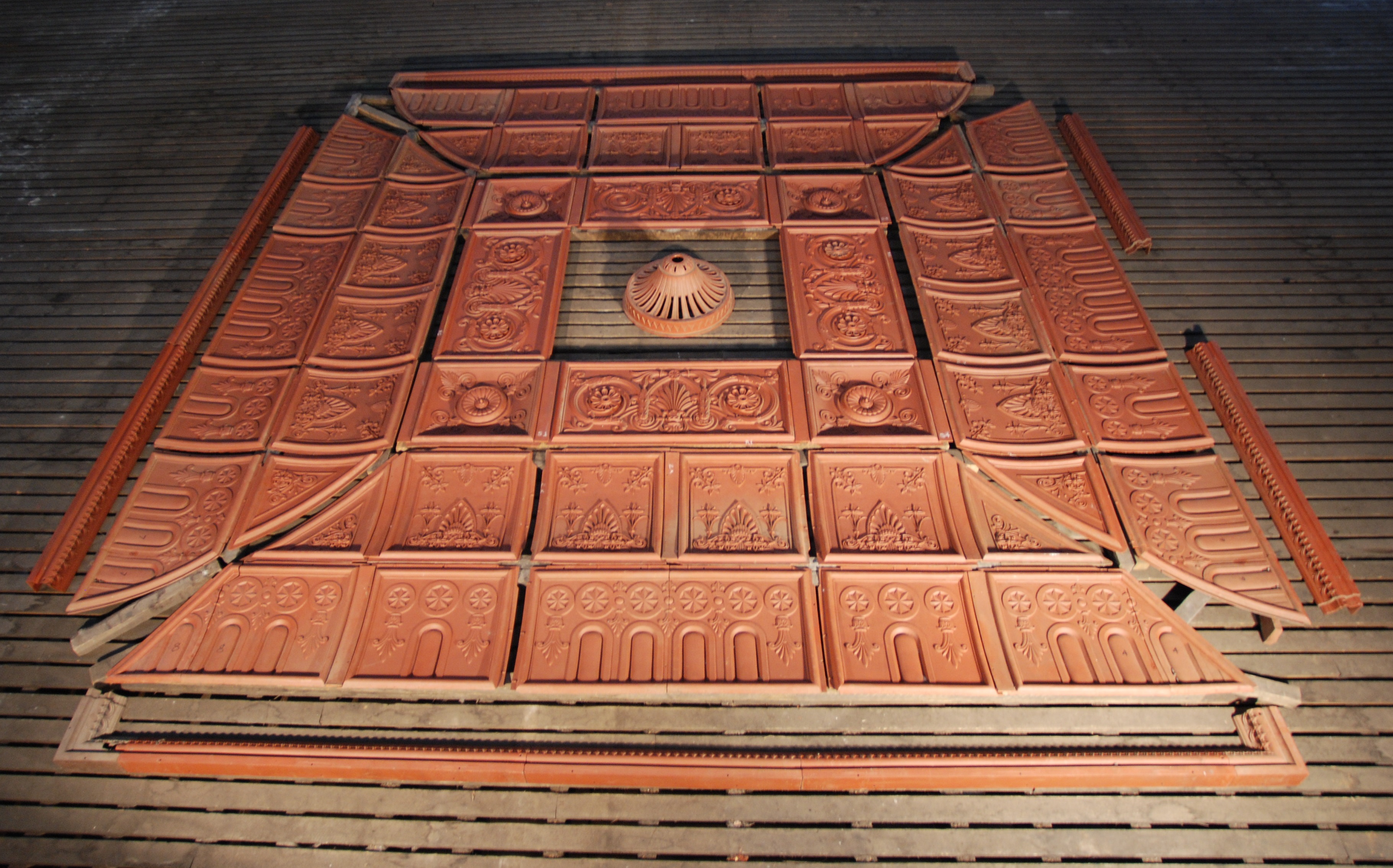 The ceiling, comprising of 66 individual cast iron panels, measuring 17 feet by 17 feet when assembled and weighing in at around two tonnes, was donated by Mr John Hogg of Morayshire. It was allocated to Historic Environment Scotland through the Cultural Gifts Scheme – an initiative that allows significant works of art and heritage objects to be donated and held for allocation for the benefit of the public.

This is the first time that Historic Environment Scotland has benefited from the Cultural Gifts Scheme.

Dating back to the late 1800s, the cast iron ceiling is from the showroom of the Glasgow-based Sun Foundry of George Smith & Co. one of the four key architectural founders of the period. A former employee of the famous Saracen Foundry, Smith established Sun Foundry in 1857. Examples of their work stretched throughout the British Empire, whilst examples closer to home include the clock tower at Bridgeton Cross and the grand fountain in Paisley, which was recently restored.

Ceasing operations in 1889, the ceiling remained in place at the foundry’s former building on Glasgow’s Kennedy Street, occupied by the firm of Fyfe and McGrouther, until it was demolished in the 1990s. After demolition the ceiling ended up in the far north of Scotland where Mr Hogg recognised its significance and was able to rescue it.

This design of the showroom ceiling is the same pattern as one commissioned for the Bengal Bank in India. The 175 feet by 45 feet iron ceiling for the building’s Banking Hall was cast and produced by the Sun Foundry in 1879. The bank building was demolished in the 1980s. It appears that a second ceiling was made from the original wooden patterns to be showcased in the firm’s Glasgow showroom.

Historic Environment Scotland’s Director of Conservation, Dr David Mitchell, said: “It’s with great excitement that we accepted the allocation of this significant surviving example of Scottish ironwork through the Cultural Gifts Scheme.

“We believe this 19th century cast iron ceiling to be wholly unique. In its entirety, the ceiling demonstrates the high quality of design, modelling, casting and craftsmanship that Glasgow’s Sun Foundry was producing in the last quarter of the 19th century. It also offers a new insight into Scotland’s wider ironwork industry during this time, which had, and increasingly has, an international reputation and reach. We regularly receive enquiries about iron structures made in Scotland and shipped overseas.

“From the establishment of Carron in 1759 there was an explosion of iron founders manufacturing architectural castings – from small fountains to cast iron palaces for India – literally hundreds of firms, mostly now forgotten. Scotland pioneered the application of the medium in many ways and this ceiling showcases the quality and importance of both the material and the scale of this industry in Scotland.

“We’re grateful to Mr Hogg for his foresight and detective skills in realising the importance of this piece. George Smith was an innovator and built his firm from very humble beginnings – I am sure he would be delighted at the esteem in which his work is now being held.”

Panels from the ceiling will be incorporated into Historic Environment Scotland’s Engine Shed project in Stirling. Opening in 2017, the building conservation hub will see centuries’ old traditional skills meet cutting-edge conservation science, digital documentation work and innovation. Providing people with a real opportunity to explore, discover and engage with Scotland’s rich built heritage as well as the traditional materials and skills which helped create it. It is a somewhat fitting location too – George Smith died in 1900 only a few miles from the site.

Following acceptance and allocation of the gift to Historic Environment Scotland, Mr John Hogg, added: “It is with great pleasure that, with the help of the Cultural Gifts Scheme, the survival of this remarkable cast iron ceiling by George Smith & Co Sun Foundry of Glasgow has been secured for the nation.”

The Sun Foundry showroom cast iron ceiling was accepted under the Cultural Gifts Scheme by HM Government and allocated to Historic Environment Scotland in 2016.