China’s Ambassador to the UK, His Excellency Mr Liu Xiaoming last night invited Scottish business to “roll up its sleeves and get down to business” in order to profit from China’s ongoing transformation from “high speed growth to high quality growth”.

Mr Liu was speaking at a special Scottish Chambers of Commerce Network “Q&A” dinner at St Andrews, where he was briefed on the success of the SCC’s inaugural Trade Mission to China (14-22 April). The Ambassador offered his “sincere thanks” to SCC Network for its “commitment to co-operation between Scotland and China in trade, investment, energy and infrastructure development”. 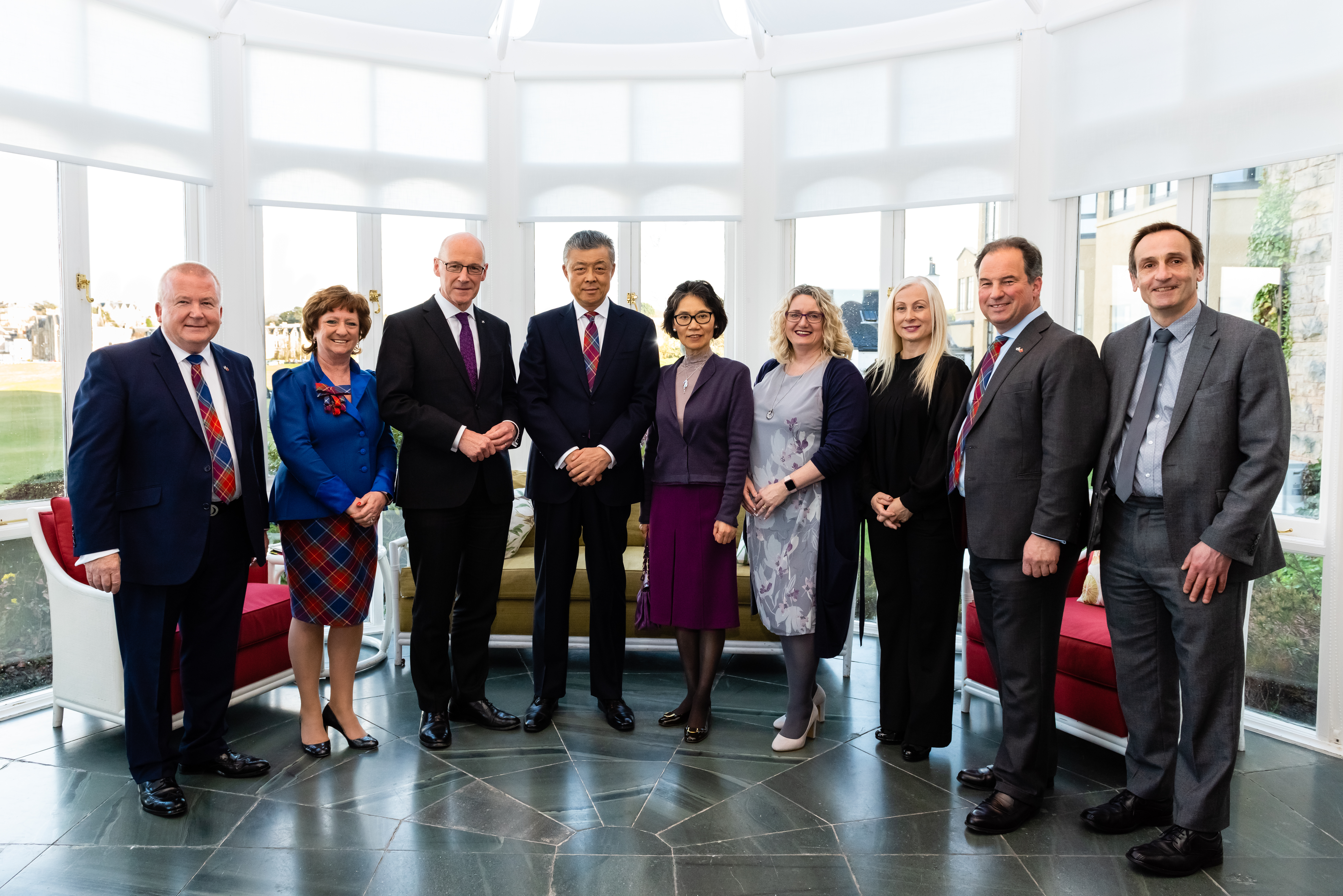 Titled “A Conversation with the Ambassador”, and also addressed by Deputy First Minister John Swinney MSP, the Global Business Dinner marked another major milestone in the Chamber Network’s pioneering business-to-business engagement with China.

Ambassador Liu’s visit came only six months after he attended a previous Chambers-hosted dinner, held in Glasgow, at which he praised the strength of China-Scottish relations and toasted “the future of China-Scotland cooperation” in a “Golden Era” of Sino-British relations.His presence in St Andrews allowed Mr Liu to meet Scottish businesses, and to give his views on Scotland’s “unique strengths in processing, manufacturing, energy and innovation.” 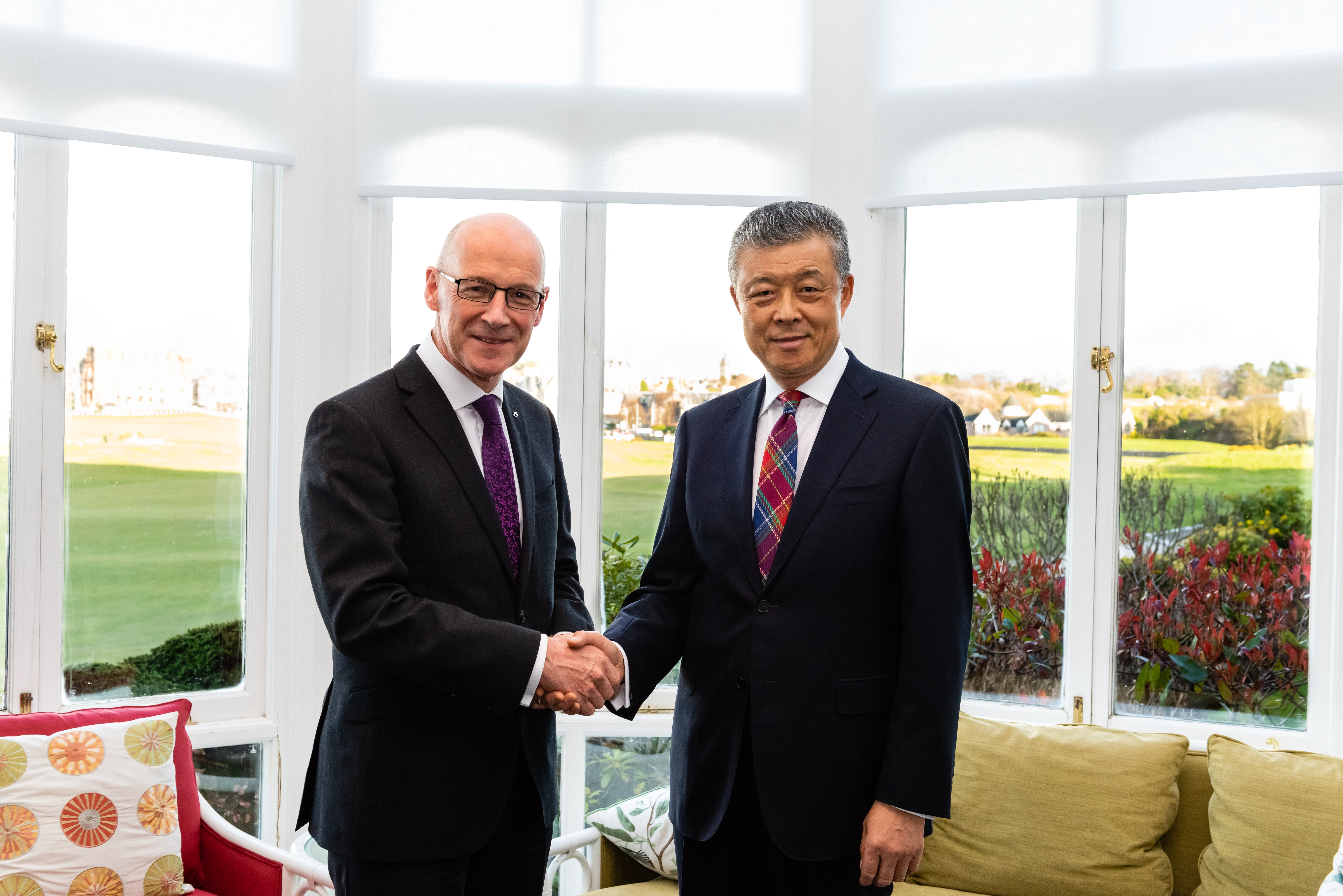 He also praised the Memorandum of Understanding signed by SCC and the China Chamber of International Commerce (CCOIC)  last month, designed to encourage Scottish participation in China’s multi-trillion dollar Belt and Road programme.

He said; “The complementarity between our two sides is obvious, we should leverage our respective strengths and grab opportunities arising from innovation, economic transformation and the Belt and Road Initiative”

Deputy First Minister John Swinney said: “The recent success of the Scottish Chambers-led Mission to Shandong has highlighted the vast opportunities in China for Scottish companies and showcased the unique and market leading products that Scottish companies have to offer.

“As highlighted by the First Minister’s recent visit to China, the economic ties between our two countries continue to flourish as the Scottish Government is supporting more Scottish companies to export to China. We continue to see significant investment into Scotland from Chinese businesses – which are now among our top five sources of inward investment.”

Tim Allan, who led the SCC Mission to China said: “Ambassador Liu is one of China’s most admired and influential statesmen, and it is a mark of his commitment to encouraging Scottish companies in China that he joined us for this highlight of the Chambers’ 2018 calendar. His description of the win-win potential of the relationship should encourage more Scottish businesses to push harder at China’s increasingly open door.”

“Particularly in Yantai a city of 8 million people, where the Scottish Chambers opened a trade office a year ago, we find we are able to reach substantial deals in an atmosphere of increasing trust and good will. Ambassador Liu Xiaoming is a major contributor to these warm relations, and we value his friendship very highly. “     During the recent trade mission it was announced that the Glasgow football tourism company Premiership Experience had signed a “seven figure” agreement with a major Henan-based Chinese conglomerate to bring Chinese tourists to Scotland, an agreement instigated by a connection made at the Glasgow dinner for Ambassador Liu.

During the recent trade mission it was announced that the Glasgow football tourism company Premiership Experience had signed a “seven figure” agreement with a major Henan-based Chinese conglomerate to bring Chinese tourists to Scotland, an agreement instigated by a connection made at the Glasgow dinner for Ambassador Liu.

In his answers to questions from guests, Mr Liu gave details of China’s increasing openness to trade, as announced by President Xi Jinping in a major speech last month when he laid out plans for several key areas to make the domestic economy more accessible to foreign businesses, and pledged to increase imports, significantly lower tariffs and speed up its efforts to open up its financial markets and increase enforcement of intellectual property protection.