Business Fives summer season proved a big success for Charities throughout Scotland with the 98 companies that took part contributing to the £19,636 fundraising total. 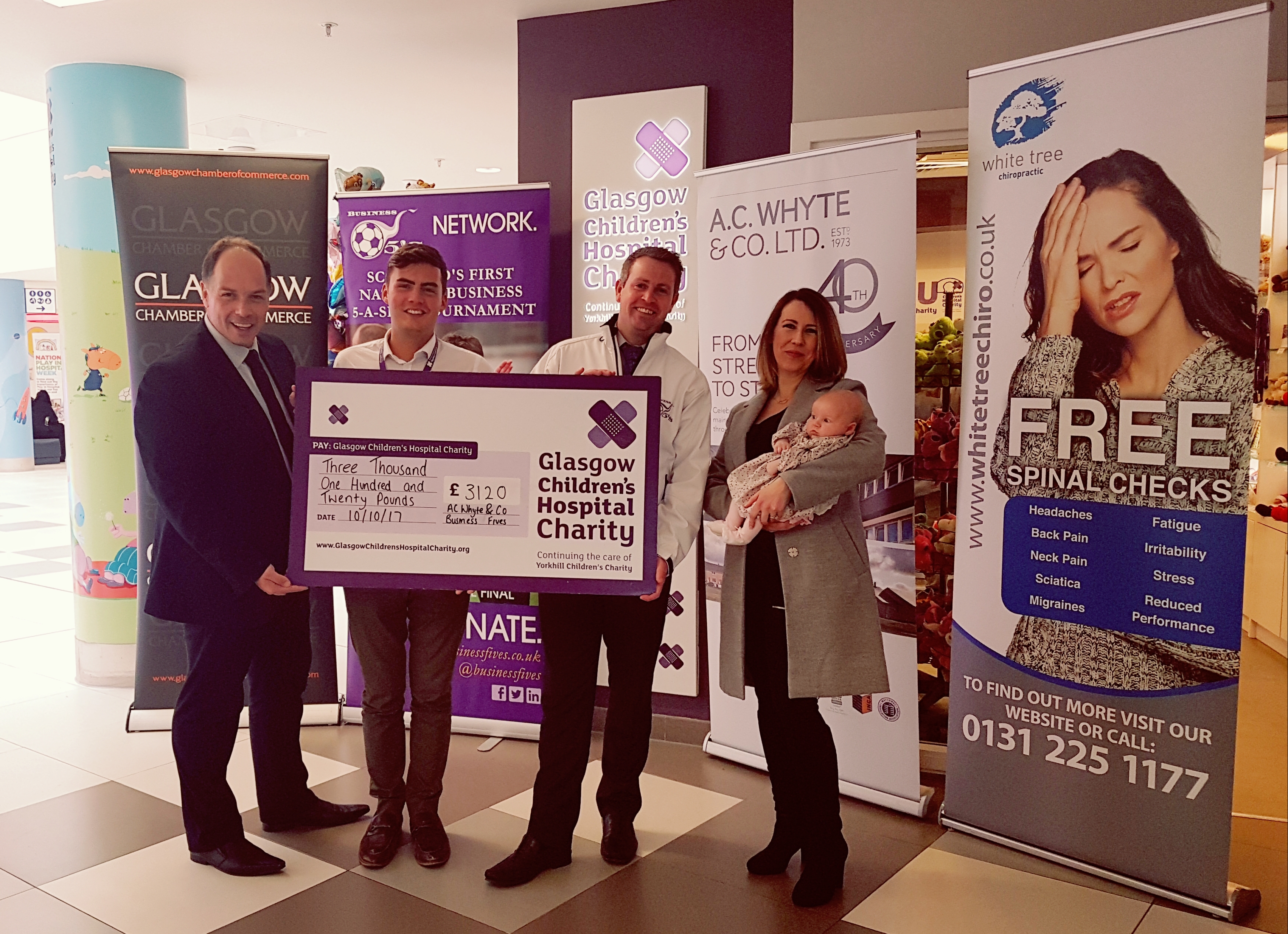 Overall winners A.C. Whyte & Co. won the Business Fives donation of £3,120 for their chosen charity, Glasgow Children’s Hospital Charity. This total is the result of the Business Fives commitment to donating 10% of all revenue to charity in a bid to create a positive impact on society through Scotland’s national business five-a-side tournament.

The tournament was supported by the Glasgow Chamber of Commerce and it was fitting that a Glasgow based charity received the final donation.  Kirsten Sinclair, Director of Fundraising, Glasgow Children’s Hospital Charity said: “We’d like to congratulate A.C. Whyte for winning first place, and share a heartfelt thanks with the team and Business Fives for this incredibly generous donation. The tournament is a terrific event raising money for a number of wonderful causes.

“The money raised for Glasgow Children’s Hospital Charity will allow us to ensure that the 168,000 babies, children and young people treated each year at Glasgow’s Royal Hospital for Children receive the best possible care and experience. Thanks to this wonderful support from Business Fives and A.C. Whyte & Co, we will be able to continue caring for children and their families from across Scotland during the most difficult of times.”

Jennifer Phin, Managing Director of A.C. Whyte & Co said “The Glasgow Children’s Hospital Charity have huge goals to ensure they can support the children and families they care for, as a Family Business we are delighted to take part in events such as the Business Fives that go on to allow us to donate to such an incredible charity.”

The Celtic and Rangers Foundations were the benefactors of the charity raffles that run throughout the summer, with £600 being raised and split between the two charities.  Both provided a signed football from the current squads to support the raffle.  Jordan McDonald from construction firm McLaughlin & Harvey picked up the signed ball from the 2016/17 title winning invincibles, pictured with Tony Hamilton, CEO of the Celtic Foundation and John McClarey, Managing Director of Business Fives.

The Rangers ball was won by a fan of the club, John Wilson via a Facebook promotion who generously decided to donate the ball to a young disabled fan and the smile on his face receiving the ball signed by his heroes justified that commendable decision.

The summer season of Business Fives, sponsored by White Tree Chiropractic provided a terrific platform for companies to engage their staff in a positive teambuilding CSR activity and it was a fantastic achievement from all the players involved to almost double the initial charity target.  The tournament moves indoors for its winter season taking place throughout January and February.