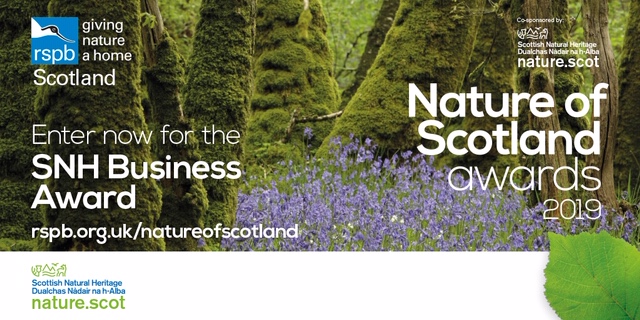 Recognising excellence, innovation and outstanding achievement in nature conservation, the eighth RSPB Annual Nature of Scotland Awards co-sponsored by Scottish Natural Heritage are open for applications until 4 June.  Entering the awards is free and applications are being sought across nine categories including the SNH Business Award, which has previously been won by Barratt Homes and Glenmorangie.

Celebrating the important role businesses play in conserving Scotland’s natural heritage, the prestigious award looks to recognise businesses large and small that can clearly demonstrate the difference they have made for nature in Scotland. From those that are collaborating with the conservation sector to support wildlife and habitats, through to businesses that are individually making a direct contribution by lowering their carbon footprint, reducing their emissions or by carrying out steps towards climate adaptation in harmony with nature.  All applications will be judged based on the impact delivered in proportion to the size of the business.

The Nature of Scotland Awards shortlist will be unveiled at a Parliamentary Reception in September and the winners will be announced at a Presentation Dinner on the 4 December at the Sheraton Grand Hotel in Edinburgh hosted by award winning wildlife cameraman and TV presenter Gordon Buchanan and BBC Scotland’s wildlife expert Euan McIlwraith.

To celebrate the organisations and businesses going above and beyond to support our precious natural heritage. Nominate your business by 4 June by visiting rspb.org.uk/natureofscotland.