Catch up on the latest business news from our Business Comment magazine!

In the latest issue of our Business Comment magazine, the focus is on our vital tourism sector which supports over 30,000 jobs and contributes about £1.4billion of value to our local economy each year.

Edinburgh is the gateway and major driver of the Scottish tourism industry, and in the magazine we hear from Malcolm Roughead, CEO of VisitScotland. who reinforces the value of the sector by explaining that the tourism industry creates over 217,000 jobs and generates £12 billion of income each year in Scotland through 15 million visitors from the UK and overseas.

our contributors from Edinburgh Napier University – Jane Ali-Knight an Kenneth Wardrop – tell us that Edinburgh is known as ‘the world’s leading festival city’. ‘Its success is characterised by collaborative partnerships and leadership that are models of ‘best practice’ and it demonstrates the powerful role of culture as a driver of tourism and a catalyst for wider economic impacts including the attraction of talent and inward investment.’

We also hear from the new Chief Executive of the Royal Highland and Agricultural Society, Alan Laidlaw, who explains the vital importance of the rural economy to tourism, and the major role played by the Royal Highland Show. Michelin star chef Tom Kitchin, a star of Britain’s culinary scene, provides us with some enthusiastic thoughts on Edinburgh’s burgeoning reputation as a gastronomic destination for high spending foodies. And Lothian Buses, a corporate member of the Chamber, explains the significant investment made in tourist buses, while we hear that Forth Ports continues to develop their cruise ship business, with more than 100,000 visitors arriving in the Capital on almost 150 ships.

We can hope that exchange rate volatility might be of some benefit to this important sector, with a likely increase in ‘staycations’ as holidays abroad become more expensive.

There is consensus that – while the city enjoys a highly competitive position as a destination – there is no room for complacency. That makes your Chamber’s interest and involvement in the bid for a City Region Deal even more important. The funding, if successful, would be earmarked to further support tourism and culture, invest in infrastructure, grow the economy and improve engagement across all communities.

I hope you enjoy the magazine. 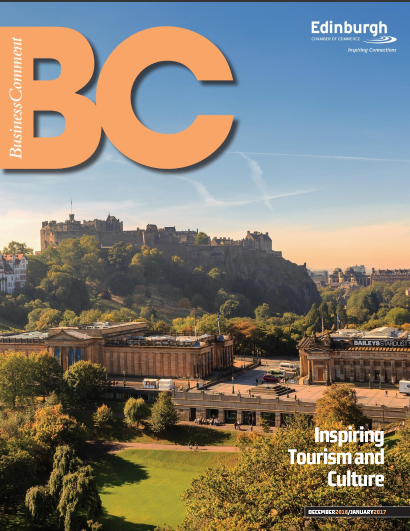