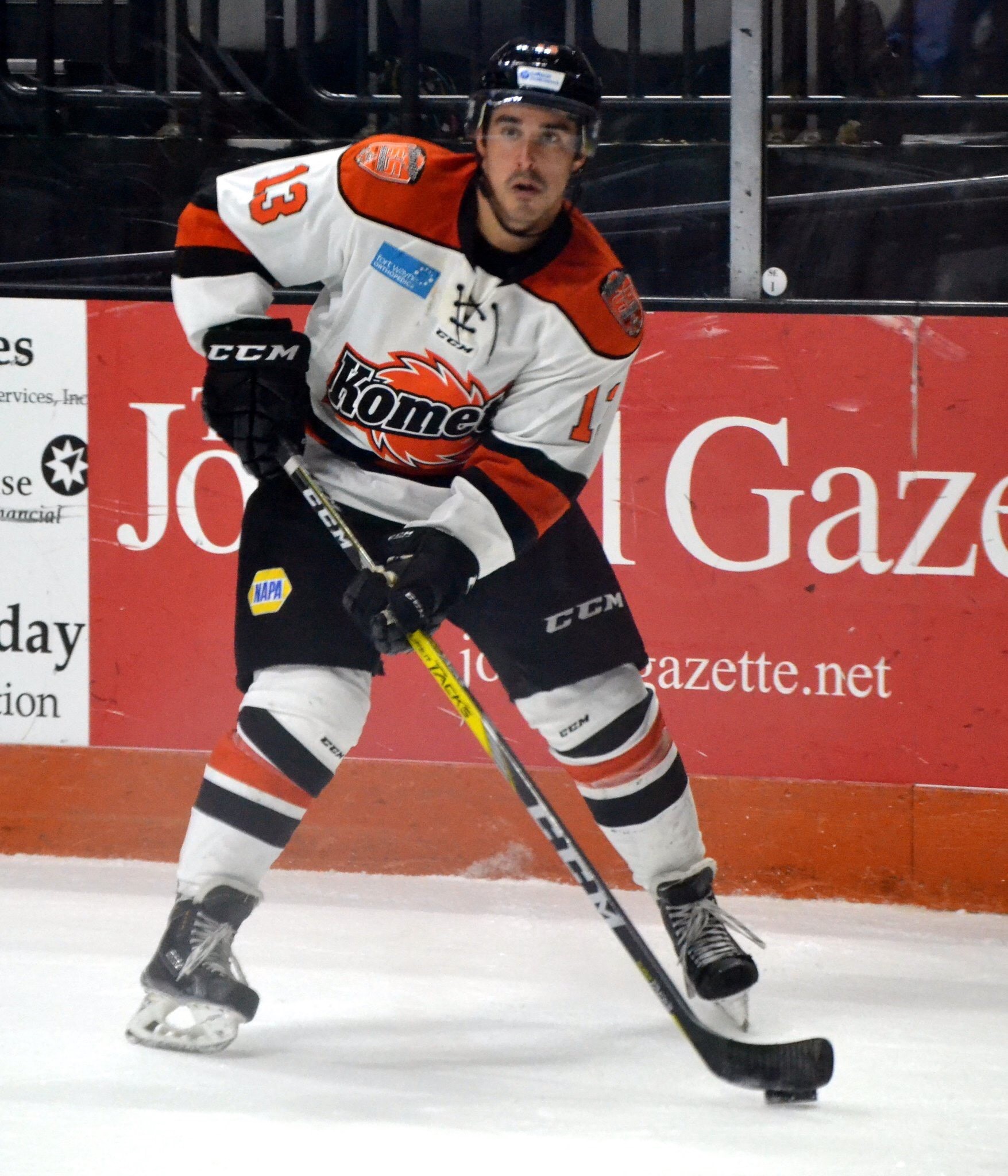 Mike, who is originally from Guelph in Ontario, was recruited by the Capitals having had a hugely successful rookie season in the East Coast Hockey League in the United States/North America. He was a top point scorer for his club The Fort Wayne Komets, and also the top point scoring rookie in the ECHL.

Edinburgh Capitals has welcomed the ECHL All Rookie All Star with open arms and has high hopes for his future contribution to the team and for his impact on the sport in Scotland.

Before coming to Scotland at the end of August this year, Mike had spent four years studying at Acadia University. During his time at the University, where he studied a degree in Kinesiology, he continued to post impressive numbers scoring 133 points in just 107 games for his University. Over his four seasons attending the University, he was never out of the top two in scoring and was top scorer twice.

Part of the appeal of coming to Scotland was the chance to enrol with Queen Margaret University on its two year MSc Physiotherapy (pre-registration) course. The School of Health Sciences at QMU provides the largest range of professional healthcare courses in Scotland.

Mike has always liked to challenge himself – academically and physically – so he is delighted to be combining his hockey playing skills with the chance to study at postgraduate level.

He explained: “Combining my passion for ice hockey with the chance to study physiotherapy at QMU is a once in a lifetime opportunity. Scotland is renowned throughout the world for the quality of its higher education and I feel privileged to have the chance to experience and benefit from the country’s education system. I am now in the process of meeting the physiotherapy lecturers and am enjoying getting to know students from Scotland, the rest of the UK as well as international learners. I am really looking forward to becoming part of the QMU community, discovering the beautiful city of Edinburgh and the East Lothian coast, and contributing to the development of the Edinburgh Capitals.”

Professor Fiona Coutts, Dean of the School of Health Sciences at QMU, said: “We aim to create educational courses at the leading edge of today’s issues, with graduates who are in demand, work-ready, able to progress in their chosen profession, and who can challenge current healthcare practices. Importantly, this course produces postgraduate physiotherapists who are skilled, independent and critical thinkers, analytical and capable of evaluative judgement, and who can contribute to the health and wellbeing of the individual and of society.”

By studying physiotherapy at QMU, Mike will benefit from a well-equipped School with specialised teaching facilities and state-of-the-art laboratories where practical skills can be honed before clinical placement. QMU also has a range of research laboratories, and a suite for the measurement of human movement using three-dimensional motion analysis, human performance and neuromuscular analysis.

Professor Coutts confirmed: “We are sure that with Mike’s understanding of physical activity, coupled with his existing academic knowledge in Kinesiology, that he is well equipped to take on the challenges of the our MSc Physiotherapy pre-registration programme.”

Professor Coutts concluded: “Mike is going to be kept extremely busy during his two year scholarship with QMU which will involve juggling intensive course work and 1000 hours of placement with his sports commitments. However, as a successful athlete I’m sure he will relish the challenge. We look forward to helping him settle into the QMU community, supporting him on his learner journey and encouraging him to achieve his academic goals!”