Business Fives kicks off in Edinburgh this week with the first of 2 events in the city this winter supported by the Edinburgh Chamber of Commerce. 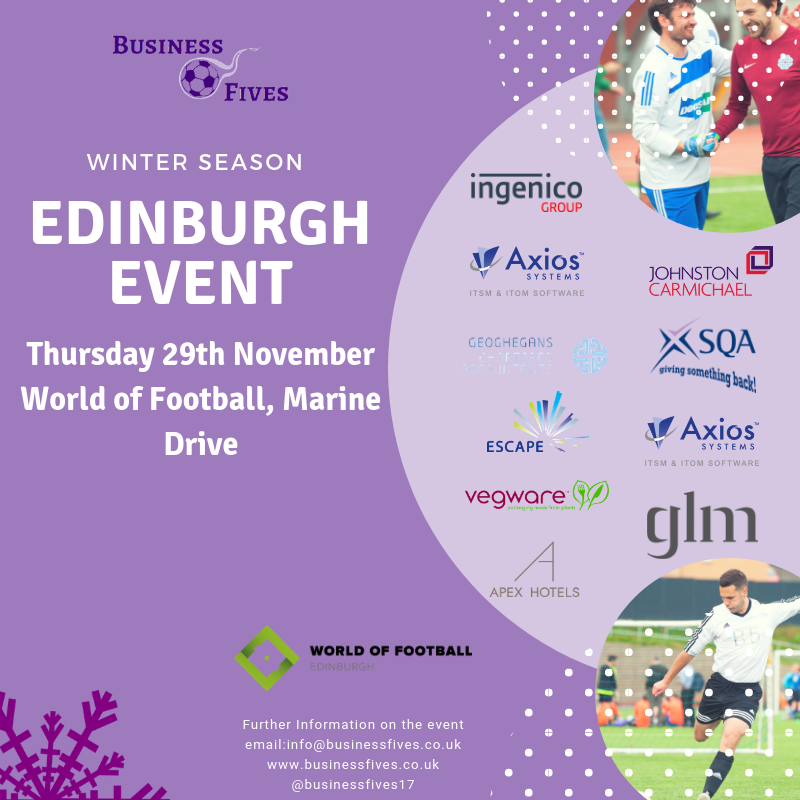 Edinburgh firms had the choice of two qualifying events with the first on Thursday and the second in the New Year to be held on Tuesday 5th February which is almost sold out already.  The five a side events for football loving firms will also take in 3 English cities for the first time before the tournament concludes with the national final back in Edinburgh in March where the national business five-a-side winter champions will be crowned.   All three events in the city are being held at the stunning new facilities at Marine Drive, the World of Football venue.

We are pleased to once again be partnering with the Edinburgh Chamber of Commerce following the success of the partnership in recent years. Getting the chance to bring business together while promoting a healthy and active lifestyle is fantastic and given the companies already signed up for the November events in Edinburgh that include Johnston Carmichael, SQA, pureLiFi, Vegware, Axios Systems, GLM, Escape Recruitment, Geoghegans, Apex Hotels and Engenico it promises to be another great event.

As a socially conscious enterprise Business Fives have again committed to awarding the winning team with a bumper donation to their chosen charity of 10 per cent from all of the event’s revenue.

The corporate football events with a charitable impact have a host of stellar clients and are an excellent opportunity for teambuilding and networking for footie loving firms as well as raising money for charity simultaneously.

Since launching in 2016, Business Fives have seen year-on-year success having worked with over 500 companies and raising £65,000 for charities in the process.

Business Fives ambassadors former Hibernian manager star and ex-Celtic Ace Yogi Hughes, ex-Hearts star Gary Mackay will be along at the Edinburgh events for a Question and Answer session at the drinks reception.

Tournament founder and Business Fives managing director John McClarey – who also organises a highly-successful Business Fours golf tournament – says “the events have proven to be a very big hit in Edinburgh and we are looking forward to kicking off our winter events in the city.  We’ve been really impressed at the charitable efforts from the city of Edinburgh that has lived up to its reputation of having communities at the heart of their work.  Given the mix of companies we’ve had involved it promises to be another good networking opportunity.”

There will be two events taking place in Edinburgh this winter: