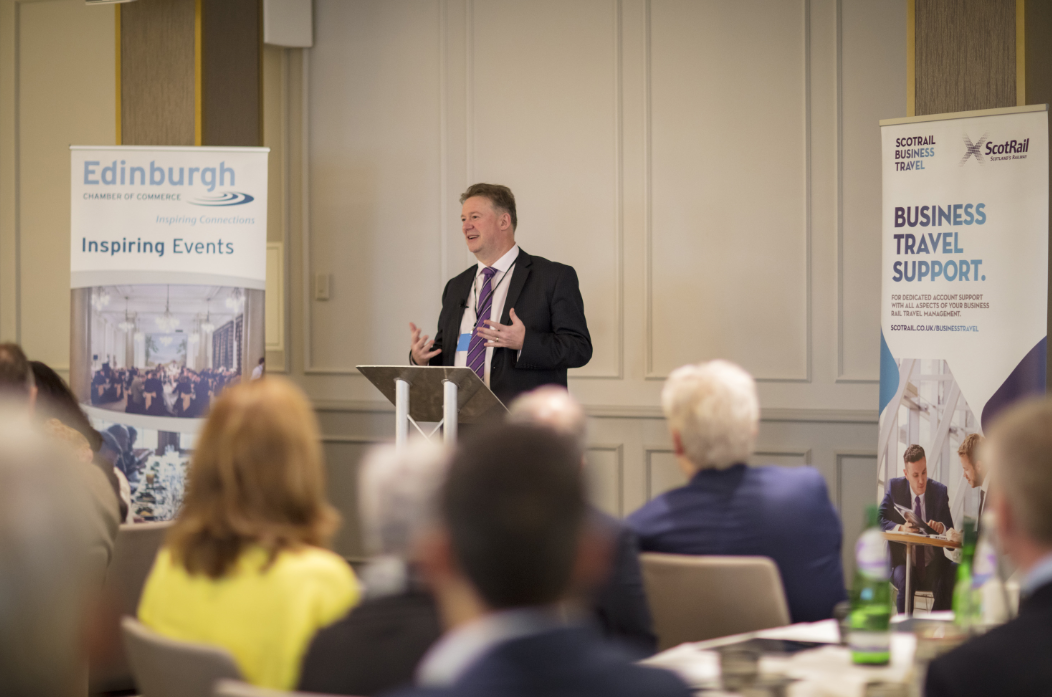 On a chilly Friday morning in January, Chamber members were treated to the annual update from the CEO of the City of Edinburgh Council. This regular update has been going for some 7 years and helps members frame their year ahead as well as reflect on some of the key achievements and challenges of the previous year. This year was a forward looking presentation with updates on the City Region Deal and the City Vision that was launched in September 2016. Andrew began by reviewing the work the council had achieved through 2016, and of particular note was the introduction of Scotland’s first social stock exchange. He gave an honest account of dealing with closing 26 schools, addressing the welfare and healthcare challenges, reducing budget, shedding 1,300 staff and fully replacing the Executive Team since he took up his post.

With elections in May for new councillors he is conscious there may be a 50% change to the current elected members makeup, so a significant new group of local politicians that he and his team must advise and support in an ‘honest and meaningful way’. He outlined his strategy of having a rolling 4 year plan which will give a more achievable planning horizon and sense of vision, with accountability at its heart. Edinburgh won their pitch to host the Eurocities Conference in November 2018 which will be right in the middle of the important Brexit negotiations and will be an important connection for Scotland to other European cities. Edinburgh was also awarded UK Entrepreneurial City of the year 2016, City with most green space and FDI City of the Year, a striking indication that Edinburgh is getting many things right. There is still much to do and Andrew challenged us all to be part of making Edinburgh the strong, confident Capital City it can become. The City Region Deal which he hopes will be announced in March 2017 will be the first highlight of the coming year. This is projected to bring some £2bn of value to the Edinburgh City Region. It will focus investment into innovation and skills, infrastructure and transport, affordable housing and culture and tourism. Alongside the additional funding will be greater devolved powers to the city council to manage their estates and potentially levy local tax.

The 2050 City Vision is beginning to capture the imagination of the Capital City’s citizens. The City Vision consultation was launched in September 2016 and the ambition is to have a final draft of the Vision by summer 2017 following extensive engagement across the city. This requires the participation and contribution of the city’s citizens and communities on how Edinburgh should look, feel and operate as we move towards 2050. Andrew is passionate about addressing the city’s poverty shame and revealed that whilst 25% of school children enjoy private schooling, 25% live in poverty – an unacceptable statistic.

He has a vision for Edinburgh becoming ‘The Best City in the World’, a city that reaches out to the rest of the world and is a Strong, Confident Capital City. But this vision has to be the city’s vision not the City Council’s and it is for the citizens, through their engagement and contribution to the consultation, to decide what their vision for the city will be. The 4 key themes that have emerged so far are: Inspired, Connected, Fair and Thriving. So with a City Deal and a City Vision to progress plus further budget cuts and new elected members to advise and support he has a busy year but one which he recognises as the ‘year of delivering’. He thanked the Chamber and its members for contributing their views into the City Vision 2050 – edinburgh2050.dialogue-app.com – and encouraged those who have not yet had their say to do so.