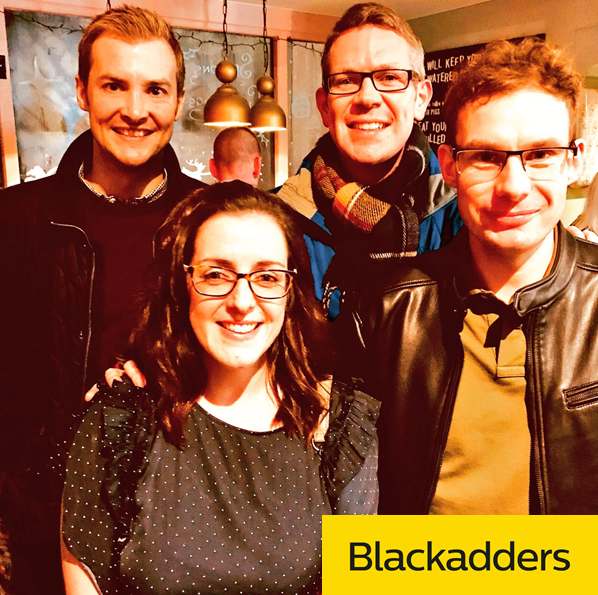 Blackadders’ Employment Team has been nominated for the “Innovation in Practice Award” at the Scottish Legal Awards 2018.

The team has received recognition for their series of podcasts – Employment Lawyer In Your Pocket – which are available for free on both the website and on iTunes.

Simon Allison who heads up the Employment Team was also nominated for the “Lawyer of the Year Award”, unbeknown to him he was put forward for the award by fellow team member, Associate Solicitor, Jack Boyle. When asked why Jack nominated Simon he said; “That’s easy. Simon deserves this award because he has unparalleled success DESPITE having a stroke early last year. As Simon himself says, “When the going gets tough and I wonder why I am doing this, I remind myself, it’s because I can.”. Simon commented that it was “a lovely surprise to be nominated for the Lawyer of the Year Award and that he is truly honoured although he is also going to keep a closer eye on Jack in future”.

When asked about the team nomination Simon commented, “We are absolutely delighted to be nominated for this accolade. It is recognition of both the quality content and the hard work which the team has put into their podcasting journey. Both Blackadders and the Employment Team are flattered to be named as one of the finalists.”

The team commenced their podcasts in December 2016. Series one was entitled “Eight steps to conduct a fair dismissal”. Series two was entitled their “How To” series of podcasts where the team cover such topics as “How To Be A Good Witness”, “How To Deal With Stubble and Tattoos”, “How To Manage Your Apprentices” and “How To Appoint A Data Protection Officer”.

Simon commented, “Each podcast lasts for approximately 10 minutes. The rationale was that a ten minute podcast was longer than the length of time for Queen’s Bohemian Rhapsody and less than Meatloaf’s I Would Do Anything For Love (album version). Believe it or not, there is no actual script. And editing has been minimal to ensure that the natural flow of our friendships was not missed.”

The purpose of the podcasts was not to be the best podcasters in the world. Instead it was to raise the profile of the firm and to generate new business and new clients. We have been really successful in all of these criteria both locally and throughout the UK.

“We were advised that if we managed to get 150 listeners for each season, that would be a great result. By the end of season one, we had over 800 listeners. Season two ended in December and at the last count, there were over 3600 subscribed listeners.”

If you want to ask the team a question which may be featured in season three of their next series, you should tweet them using the #ELiYP hashtag.

Simon has promised the team that he will take them to watch a Real Madrid match if they win the award.

Let’s hope that, for Simon’s sake, the team will be dining on mince and tatties this summer as opposed to tortillas.