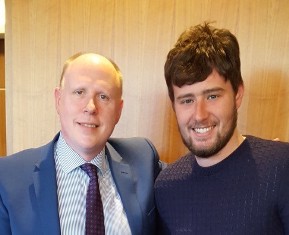 It’s startling to learn that 2 people die in Scotland every day because of Suicide and that Suicide is the biggest killer of men under 35.  To tackle this, a global suicide prevention movement has been initiated by The Tartan Explorer, Josh Quigley. The movement which started in November 2015 has reached and touched the hearts of over half a million people in over 40 countries worldwide. On the 26th May 2016, exactly one year to the day after his own suicide attempt, Josh (age 24) will be leaving Scotland on a global mission which is using his second chance at life to help break down the associated social and cultural stigma, encourage others to seek support and ultimately prevent suicide.

Josh, a former Young Entrepreneur of the Year, will be cycling 50,000 miles to over 80 countries on six continents, telling his story and encouraging people around the world to talk about mental health.  Josh envisages that the expedition will take up to 4 years.  During this time he will have no income but will focus exclusively on the trip and meeting people to raise awareness of suicide and the importance of prevention measures.  Speaking of his upcoming world-covering cycling journey, The Tartan Explorer said:

“I’m determined to inspire others to have positive conversations about mental health. I want to use this movement to help to break down the associated social and cultural stigma, encourage others to seek support and ultimately prevent suicide. This journey for me is a new start, a new life and I will use my journey to help others along the way. All the kind comments, messages and pledges of support really drive me on. I’m very grateful to AM Bid Services and other very kind organisations for their support. I couldn’t attempt this expedition without the backing of others – any help provided is hugely appreciated.”

Impressed and invested in The Tartan Explorer’s passion for educating and helping people around this sensitive issue, Andrew Morrison, Managing Director at AM Bid Services said:

“It is a privilege to be providing some assistance with Josh’s expedition for such an important cause.  Our team has been inspired by Josh’s story and we are pulling out the stops to try to help him reach his goal.  This includes speaking to our many business contacts in a bid to attract a Headline Sponsor who can help with vital funding.”

The message of The Tartan Explorer is clear Any life can be brought back from the brink to achieve something incredible.