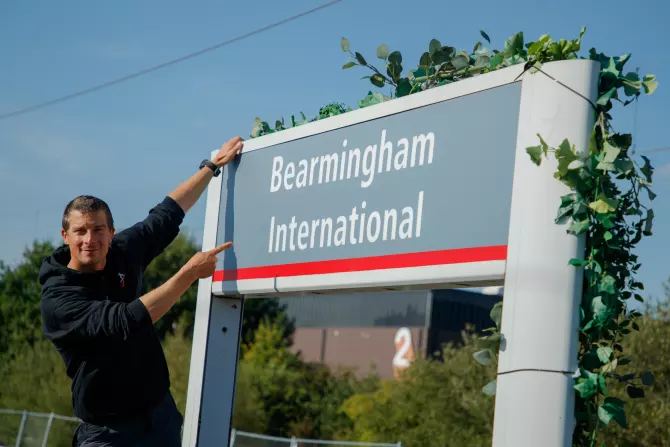 – Station renamed to celebrate the forthcoming opening of Bear Grylls Adventure at the NEC* Attraction is a mere stone’s throw away from the railway station
– Groups travelling with Virgin Trains will enjoy a 20% discount on Virgin Trains advance fares
– Virgin Trains’ Birmingham International Station has officially become ‘Bearmingham International’ for a week from today to celebrate the arrival of the eagerly anticipated Bear Grylls Adventure.

The new adventure attraction will be a short walk from the station itself, located right beside the Genting Arena within the NEC campus. Commuters and families arriving by train this week will have to double take when they arrive at their destination.

Bear himself was there to unveil the new signage and stated “It’s amazing to see the buzz around the Bear Grylls Adventure today. It’s been an incredible road embarking on this new attraction with the team at Merlin Entertainments and such an honour to have a station renamed after me today. We’ve received such a warm welcome from Birmingham so far, and we are proud to make it the home of our first ever Adventure park.”

The partnership between Merlin Attractions and Virgin Trains sees the station renamed for a whole week with platform signs all changed to mark this special take over.
With the opening confirmed for 1st October, the wait is almost over for budding adventurers who want to tick a whole host of experiences off their bucket list including diving, Europe’s tallest high ropes course, indoor sky diving, rock climbing and base camp – which will equip you for the skill to tackle any adventure. All this under the expert guidance of trained experts on site.

Although the rename is temporary, Bear Grylls has truly left his mark on Birmingham as he’s embarked on his final hard hat tour of the attraction, paving the way for launch. Bear commented “This last year has been such a journey and I want to thank everyone involved in Bear Grylls Adventure for turning this vision into reality. In recent weeks seeing the attraction really take shape from our initial designs and getting to try out the activities has given all the team such a sense of pride and achievement. I just can’t wait for people to learn and be challenged across all the different adventures at Bear Grylls Adventure. This really is adventure at its best, in 1 day!”

James Thomas, General Manager at Bear Grylls Adventure said “October couldn’t come any sooner, it has been such an honour to work with Bear Grylls on this attraction from the initial design stages right over to this station rename. We seriously cannot wait to open to allow people to experience this incredible attraction first hand.”

Lorraine Ley, Station Manager for Birmingham International commented “It was great have Bear down at the station today to help celebrate the rename. It’s a fun thing to do and we hope it will put on smile on peoples’ faces. Travelling to the new attraction by train couldn’t be easier, and certainly more BEAR-able than driving, if you can excuse the pun!”

Bearmingham International will start to see thrill-seekers flooding in over the coming months as fans will travel nationwide to be challenged and rewarded by Bear Grylls Adventure. Groups of 3 and up will also be able to save an additional 20% off advance Virgin Trains services.