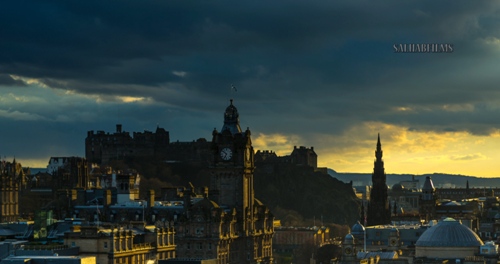 Walid spent 4 weeks filming ‘My Edinburgh’ and 3000 static photographs made it to the final edit of the 2 minute film.

Often dubbed ‘Mr Kinetic’, Walid has also captivated international audiences with his spectacular portrayal of The Kelpies in Falkirk, Edinburgh in winter (Kinetic Edinburgh II) and the original Kinetic Edinburgh I. Walid’s suite of dynamic kinetic films has achieved millions of hits on social media.

Commenting on the new film, QMU’s Walid said: “The idea behind ‘My Edinburgh’ is to try and capture the stunning storm cloud formation around the centre of Edinburgh. The film starts with shots of Edinburgh from across the Firth of Forth, the Forth bridges and Calton Hill. Most of the shots were taken before during or after a rain storm to try and capture that dramatic type of light.”

Walid has also produced a series of ‘kinetic’ (stop-motion time lapse) films which capture the magic of Scotland’s capital city and the stunning beaches of the east coast of Scotland. Kinetic Edinburgh II has been shared globally and has over 3.2 million views on social media.

Walid was the only filmmaker to have access to the complete build of the Kelpies in Falkirk. His stop-motion time-lapse film has helped put Falkirk on the global tourist map.

If you are keen to talk to Walid from QMU’s Kinetic film project about the kinetic filming technique, aerial filming or general video production for your company or project, E: kineticscotland@qmu.ac.uk.