Arts & Business Scotland (A&BS) has announced the shortlist for its 30th Annual Awards celebrating excellence in innovative relationships between the cultural and business sectors. 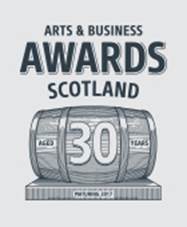 A&BS exists to put business into culture and creativity into business by advocating the value of cross-sectoral partnerships to encourage collaborative working. The charity says this year’s shortlist is one of the most diverse in recent years with a strong emphasis on cultural organisations delivering projects that enable both social and economic benefits for rural and urban communities.

A&BS Chief Executive David Watt said: “This year’s shortlist is a fantastic reflection of the innovation and creativity which exists between the cultural and business sectors, contributing to a thriving and vibrant cultural offering here in Scotland.

“Throughout the judging process what was abundantly clear was the value that cultural organisations bring to both rural and urban communities though their social and economic impacts. It is hugely encouraging therefore to see such a diverse range of businesses demonstrating a willingness to support this activity in Scotland.”

Some notable comments made during the judging included that a project had the ability to reach “new audiences, providing skills development for local community” while another “had raised significant awareness of the history and fabric of the city”. Recognising the value of the business to cross sector partnerships the judges commented that one in particular was “a strong example that highlighted the business’ commitment to the local community”.

The shortlist for this year’s awards cover a whole spectrum of business sectors from finance to manufacturing, universities to social enterprises and more unusually, a scaffolding company and a dairy. The cultural organisations making the shortlist is an equally impressive and varied selection, including some of the nation’s best loved national companies such as Scottish Ballet and the National Theatre of Scotland to more specialised local organisations including NOISE, Summerhall and the National Centre for Gaelic Language, Culture and Arts.

For the first time the Awards will recognise an individual or team which has made a significant contribution to the fundraising efforts of an arts, cultural or heritage organisation. Individuals from the National Theatre of Scotland and National Museums Scotland will go up against Dumfries and Galloway based Alex McQuiston from Absolute Classics, the Board of Directors from Dunfermline’s Fire Station Creative and James F McKellican from Dundee’s Friends of the Caird Hall Organ for the coveted title of Fundraising Excellence.

David Watt added: “Given the financial pressures facing arts, cultural and heritage organisations it makes perfect sense that we should celebrate the outstanding efforts made by fundraising teams and individuals. This is the first time we have included this category and we’re delighted to see such a varied shortlist both in terms of size, objectives and geographical spread.”

The winner of the Fundraising Excellence Award, along with Business Creativity, Leadership, Glasgow Life Award, Enterprising Museum and the five partnership categories – Placemaking, People, Innovation, Enterprise and International – will be announced at a ceremony in March next year.

Joanne Orr, CEO of Museums Galleries Scotland said: “The Enterprising Museum award is a great platform to highlight the innovative and entrepreneurial work going on in museums across Scotland. I welcome such a strong and competitive shortlist of projects this year and congratulations to all the museums”.

The awards party will take place at Glasgow Royal Concert Halls in the New Auditorium on Thursday 23 March 2017. The evening will include an address from the Cabinet Secretary for Culture, Tourism and External Affairs Fiona Hyslop MSP, with a welcome party, drinks and hot buffet, interspersed with arts performances.