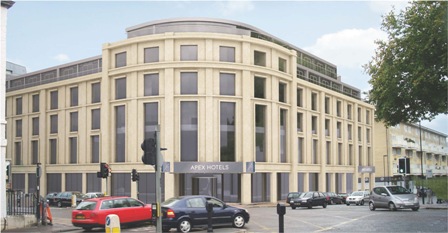 Established in 1996, Apex Hotels is building the new 177 bedroom Apex City of Bath Hotel on James Street West. Once complete, the four-floor hotel will be the largest hotel in Bath.

Due to open in the summer of 2017, the £35million hotel development will feature a swimming pool, gym, and conference and meeting facilities that have a capacity of more than 420 people to cater the city’s flourishing corporate district.

Once open, the hotel is set to create up to 120 full-time positions including front of house, kitchen and housekeeping roles. Apex Hotels, which has a turnover of £57.2 million, is based in Edinburgh and currently operates nine hotels across Scotland and London, with Apex City of Bath being its first venture in England outside London.

Ian Springford, chairman at Apex Hotels, said: “The new hotel in Bath is an exciting opportunity for the Group and we’re proud to have secured a great location in a booming city. With the new development, we’ll be able to offer a new contemporary hotel to the people of Bath, ideal for both tourists and professionals travelling to the city.

“Following a strong financial performance, our expansion marks the company’s 20th anniversary with a new venture that supports our long-term visions of growth.”