A cool run for the Wolverhampton Bobsled team with Virgin Trains 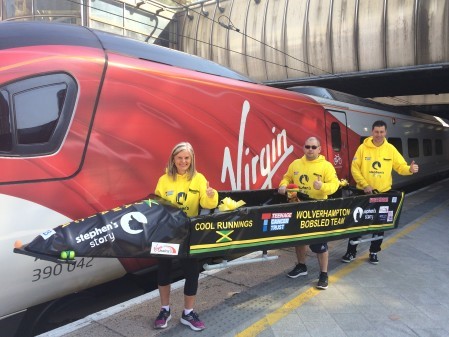 The mother of inspirational teenage cancer sufferer Stephen Sutton MBE has travelled to London with Virgin Trains continue his fundraising efforts to fight the disease.

Jane Sutton made the journey after Virgin Trains named one of its Pendolino trains after her son in 2015 in a bid to support the family. She was joined by fellow Wolverhampton Bobsled team members Andy Newman and Neil Hendy, along with their new 15ft replica bobsled, ahead of the London Marathon on Sunday, 22 April.

Jane said: “I can’t thank Virgin Trains enough for helping the team and our bobsled travel down to London ahead of the marathon.”

Jane named a Virgin Trains Pendolino ‘Stephen Sutton’ in honour of her son in September 2015 – one of only four Virgin Trains named after individuals. This very week Stephen’s train clocked up three quarters of a million miles in service on the West Coast route, a regular visitor to London, the West Midlands, Liverpool, Manchester and Scotland spreading Stephen’s story far and wide.

Andy Newman, from the Wolverhampton Bobsled Team said: “Jane has been a wonderful ambassador for Teenage Cancer Trust in continuing Stephen’s legacy. She has continued to raise awareness of the charity; with cancer and raised tens of thousands of pounds – so important when Teenage Cancer Trust receives no government support and relies upon the generosity of the public to fund its work.”

Amanda Hines, General Manager for Virgin Trains in the West Midlands enthused: “Jane is an inspiration to us all, as was her son Stephen Sutton MBE and we jumped at the chance to help her and the Wolverhampton Bobsled Team get down to London for the Marathon.

“Over 12 million journeys were made on our services to and from the West Midlands last year, and I can honestly say this will be the first one carrying a bobsled!

To support Jane and the Wolverhampton Bobsled Team you can donate via their Virgin Money Giving page https://uk.virginmoneygiving.com/WolverhamptonBobsledJaneSutton