A Case Study: How a chance meeting with a Yellow Pages Salesmen lead to the Big Bear Model Rail Controller

Peter Thurston has been a member of the Edinburgh Chamber for many years. Joining long before he took the plunge and went freelance two years ago, and remembering how valuable being a member was from his previous period of self-employment in Wiltshire. Then, it was a single email to a local fellow member of the Swindon Chamber that created a chain of interesting projects that lasted many years. As with all of us, it can be that innocuous call, or letter or meeting, that changes things forever. Peter’s blog describes one such event when a simple sales call from the Yellow Pages for his PC repair business lead to something altogether different.

A railway modeller is in his loft firing up his Flying Scotsman, setting the route to Edinburgh and off she steams. He, and it is almost certainly a ‘he’, is controlling his trains and signals using what is known as Digital Command and Control or DCC for short. Electronic signals travel from his control panel to the tracks where computer chips in the trains and across the layout make the magic happen. Let us call this man, John. John is controlling his layout from the screen of a computer, it’s as if he is the signalman and the driver all in one, the software he is using displays his trains and mimics the track on the layout and this software is called the ‘Big Bear Model Rail Controller’.

Back in 2008, I was living in the wee village of Carrbridge, near Aviemore, I was working as a freelance software and website developer, much like today, but the work was in short supply so I set myself up as a PC repair engineer to earn a little extra money, and used the name Big Bear Support, after our cat, Smudge, who was affectionally known as Big Bear owing to his bear-like stature.

Big Bear Support was well received in the area, not least because I was prepared to travel. Most callouts involved removing trojans and adware that had been introduced by grandchildren downloading games onto people’s computers. I got to explore the local area and met some interesting people, I was doing OK from the endeavour but on one afternoon on receiving a call from the Yellow Pages, decided this might be a good time to have that extra exposure.

At this point, I should introduce my own interest in model railways. Do not call them toy trains, any modeller will give you a scornful look and probably won’t make you a cup of tea, should that possibility be on the table.

As a child in the 70s, living by a mainline railway in the town of Brentwood in Essex, I became obsessed with trains and like many boys (and I am sure, a few girls too), owned my own train set, I mean, model railway.  However, as you get older, being interesting in things locomotive becomes decidedly uncool and not something you will ever want to admit to if you ever want to meet someone of the opposite sex, so the hobby tends to get put by the wayside.

Later in life, many a folk will rekindle their interest in model trains under the acceptable pretext that it’s really “for their children”, but in my case, it was after the sad passing of my grandmother that at her wake an uncle prompted me to get back into the hobby. I also discovered Stilton Cheese in the same wake, but that is for a different article. 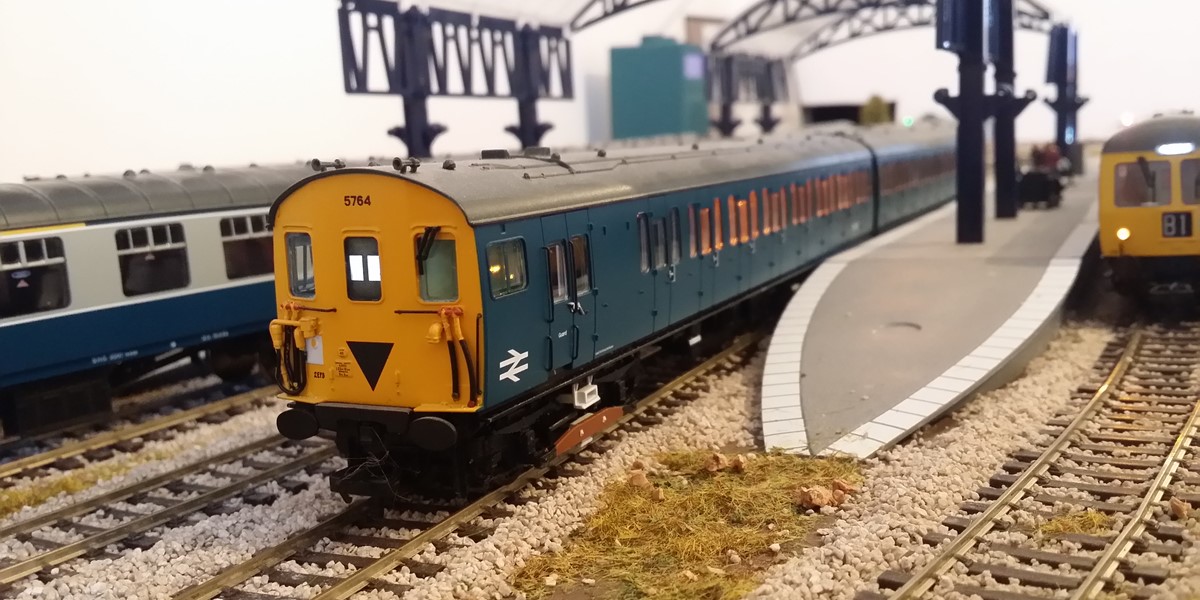 So, Dom, the Yellow Pages sales adviser arrived to persuade me to buy space in the local directory, when he spotted a railway carriage sitting on a table in my home office. It’s fair to say that conversation after this was almost entirely focused on trains, and notably a technical issue with his own layout at home, a Diesel goods depot that he called Moore Street TMD. It just so happened that my coding skills would alleviate his problem, so I offered to write a small program in return for a play with the trains. I also purchased a small panel in the Yellow Pages.

The simple program that helped Dom grew in complexity and function. I added a throttle that let you drive the trains, then later the track mimic diagram that displays the track and the signals in a manner that lets the user think they are in a signal box controlling where the trains can go.

Later we added some special features, the ability to set the optimal route between any two points on the layout, and a recording function that stored every change you make at exactly the right time.  The latter recording function allows the enthusiast to run their layout then put everything back into the right starting positions. Then they can sit back and watch it all happen, no hands!

Dom, as an accomplished sales manager had great contacts since his father ran a model shop in the Highlands. He arranged publicity for the software to be shown in a magazine article along with his Moore Street TMD layout and through his father, we shared a stall at the large Glasgow Model Railway show where we garnered a lot of interest, including some from a major model train manufacturer who took our software with the view to branding it under their name.

We later decided we could better serve the model railway community by staying independent and marketing the software ourselves. A few months later as it turns out, the aforementioned manufacturer launched their own system which by coincidence, looked broadly similar to our Big Bear. It was pleasing at least to learn that we had approached the design of the software in the right way. But there is a lesson to be learned, coincidence it may be, but those that have seen both systems assume that Big Bear was influenced by that produced by the larger and more well-known company. In future, more care will be needed when engaging with such larger players.

Over the years the Big Bear software has sold steadily with occasional advertising in magazines and on online forums. Railway modelling is an expensive hobby these days, particularly if you venture into DCC control, although the detail of the models now is exceptional. The pandemic has created some resurgence in interest for the hobby but in general, it is shrinking since with children, it is so expensive and there are game consoles and other more compelling toys that are competing for their attention. 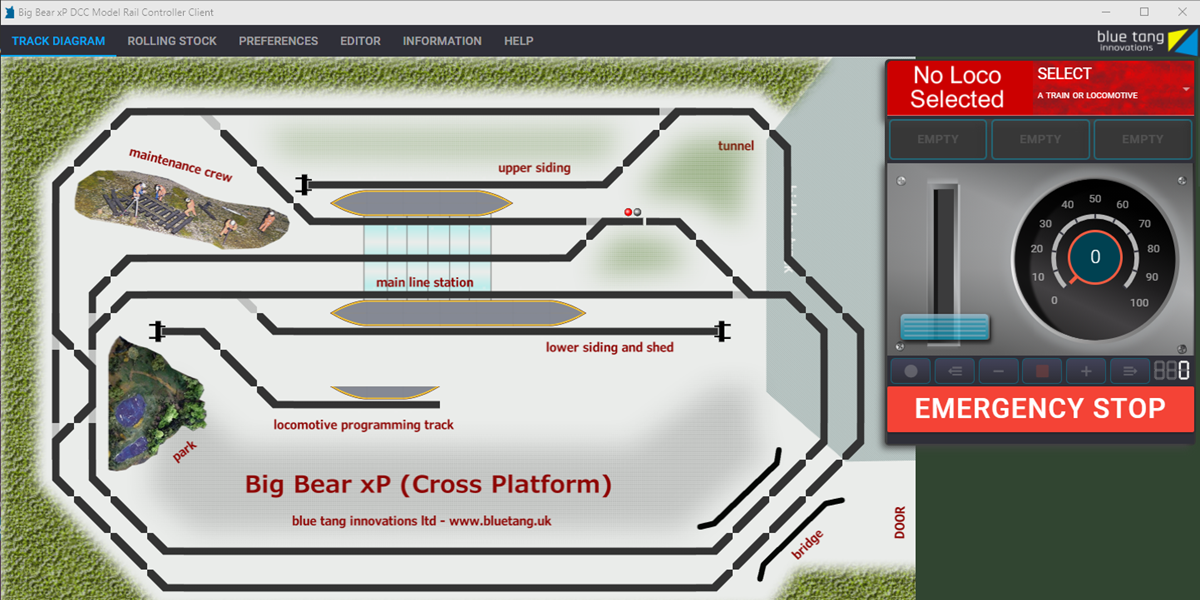 Personally, I find it a rewarding experience having developed the software and working with Dom over the years to bring it to fruition. We have sold Big Bear to enthusiasts in the UK, the US, Australia, and a few other places to boot. We are gratified to receive great feedback from users often noting how easy the program is to use when compared with other systems. I get to know many of the users personally, and being a single developer without vast testing resources, really appreciate that many are happy to allow me to work with them to sort out occasional issues with the software for their situation and for the greater good

As a developer, most of the software you work on in life is someone else’s program. Having developed an application along the lines of Big Bear in conjunction with my friend Dom, and knowing the software is being used and enjoyed by many users around the world, brings great satisfaction. The whole process also feeds back into one’s career and affords a better appreciation of the whole development lifecycle.

Big Bear has been around for a decade and a half, but times move on and since then tablets have evolved and if your mobile phone took a photo, you were pretty much at the cutting edge. The old Big Bear was designed to run on Windows PC and as with any software, over time it gets harder to maintain and to enhance.

A year ago, I decided to embark on a new version of the software, completely re-written and using the last software frameworks enabling it to run on many different platforms (pun intended). This would also present a good opportunity to learn new programming skills around building software using state of the art technologies demanded by today’s clients, such as ReactJS, .NET Core and DevExpress.

So, from that seemingly prosaic call from Yellow Pages, one that I would normally have turned down ended up as a project and friendship that would remain with me until this day. In business, and in life, you can never tell the true impact an apparently small intervention may have. As for Big Bear, it keeps ongoing. The new software has now been tested by some enthusiasts and happily gaining some positive feedback. The next phase begins, who knows where it may lead.

I hope you have enjoyed reading my account and if you would like to read more, or would like to discuss your own software requirements, please find more information here.