Viking Treasures Seen for the First Time in a 1000 Years

More than 10 centuries after being buried in a field in Galloway, conservators are releasing images that reveal the contents of a pot of Viking treasure for the first time. 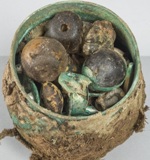 Although the objects are not currently on display, a series of images will give the public a chance to see the Viking treasure for the first time, following a painstaking conservation project to remove and conserve the rare items, which date from 9th-10th centuries AD.

The project is being funded by Historic Environment Scotland, working in partnership with the Treasure Trove Unit, and the Queen’s and Lord Treasurer’s Remembrancer (QLTR).

The cache of objects were, until recently, contained in a ‘Carolingian’ (West European) vessel, or pot, which was part of a wider hoard, amounting to around a hundred items, which includes a large number of silver ingots and armrings, a beautifully-preserved cross, and an ornate gold pin in the likeness of a bird.

The vessel contents are now with the Treasure Trove Unit, who are responsible for assessing the value of the hoard on behalf of the Office of Queen’s and Lord Treasurer’s Remembrancer. The hoard will then be offered for allocation to Scottish museums, with the finder eligible for the market value of the find – a cost that will be met by the successful museum.

The objects were found by metal detectorist Derek McClennan in a field in Galloway in September 2014.

The Viking hoard features on the latest episode of BBC Four’s Digging for Britain, which is broadcast at 9pm on Thursday 24 March